Takedown at the Guardian Breach 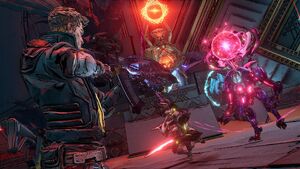 Takedown at the Guardian Breach is a free downloadable content release for Borderlands 3. [1] It was announced on May 21, 2020 and released for all supported platforms on June 11, 2020.

After arriving, Tannis deduces the planet, which appears to have exploded, has done so from the inside. From here, the Vault Hunter(s) enter onto the surface of Minos Prime, fight through several waves of native fauna, only to find crystals. Tannis has the Vault Hunter(s) charge the crystals and proceed further in. As they do, the Vault Hunter(s) hear cryptic messages spoken by an unknown voice only known as "Martyr".