For the seasonal event in Borderlands 3, see Bloody Harvest. 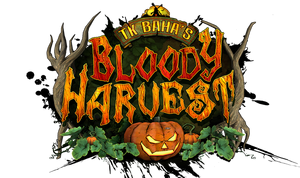 T.K. Baha's Bloody Harvest is the name of a Halloween themed DLC for Borderlands 2. It was released Tuesday, October 22nd 2013. It is the first of three planned "Headhunter" packs that were all scheduled for release by the end of 2013.

The DLC, along with the other "Headhunter" packs, will cost less than previous story add-ons and are smaller content offerings than the four previous story DLC packs that have been released.

The level of Hallowed Hollow is set when first visited, but in Normal Mode is at least 15 and at most 35.

Bloody Harvest amounts to a single, medium-sized environment, called Hallowed Hollow, that has been built around a fetch mission and a boss fight with the Pumpkin Kingpin. Once the boss has been defeated, players obtain its head, which can be added to their collections of wearable heads from the other packs.

The fetch mission involves fighting through a graveyard and haunted town while assembling the pieces of a key to the Pumpkin Kingpin’s pumpkin patch.

Once the main story mission has been completed, a secret boss named Clark the Combusted Cryptkeeper may be fought, but it requires performing a few tasks in order to spawn him. In Necropolis are four tall tombstones with unlit beacons at the top. Nearby each tomb is a clue on what task must be performed to light the respective beacon. Once each beacon is lit, the boss will spawn. All four tasks must be performed in the same session to spawn the boss; completions do not save between sessions.The tasks are:

Jacques O'Lantern is summoned and fought in the same area as Pumpkin Kingpin. He is the essentially the same boss, but with a different name.

The loot cauldron is found next to the burnt bridge and can be used to sacrifice loot for new gear. Insert one shield, one grenade mod and one weapon into the cauldron for a loot chest to appear, rarity seems to have no effect on items generated.

Finally, three televisions are hiding in various secret areas. Each television shows a small horror-themed clip, once all have been found, the beacon at the church will be lit.

Downed enemies in Bloody Harvest occasionally leave behind a little piece of candy that can be collected for a temporary boost to some aspect of a character. Each piece of candy is a different color and the item card displays a rhyming item description that hints at what sort of ability boost it grants.