T-Bone Junction is the starting area of The Secret Armory of General Knoxx. It serves as the main hub for missions, trading, and travel to and from this DLC.

T-Bone Junction is made up of two cul-de-sacs, connected by a single road, connecting a group of apartments and stores. Vehicles can freely travel the short U-shaped roadway of the settlement and pedestrians also have access to a series of catwalks and an elevator that has stopping points in each of the three primary elevations. A fourth, run-down, sub-level can also be accessed beneath the main structure.

It has all the basic vending machines, as well as Catch-A-Rides and New-U Stations. The local Fast Travel terminal is inside a structure that appears to be heavily used as a transport terminal.

A med vendor is the only thing of note in this room, although a cardboard box can reveal a small amount of ammunition when opened. The silent participant Dr. Zed is here and has nothing to offer aside from an occasional greeting or comment. Also, he presumably maintains the med vendor.

In the lowest section of T-Bone Junction, there are a number of suspended buildings with walkways around them. One of these structures houses a hidden room that is locked initially, but can be unlocked with a nearby switch. The switch is located on the far side from the door of the unit, next to a red weapons chest. Inside the room is a refrigerator and a shrine to Lilith. The fridge conceals a Level 61 Meat Popsicle in side of it, although aside from the light show surrounding the "Wanted" poster of Lilith there is nothing else of value.

The local gun shop is located on the bend of the road on the eastern platform. It is furnished with both weapon and ammunition vending machines. Marcus operates the store personally.

This building houses the local Fast Travel station. It contains lockers and ammunition crates, as well as an ammunition vendor, to ensure that opportunistic Vault hunters are well stocked on arrival.

Scooter maintains the imaginatively titled garage near the intersection. This facility is furnished with a Catch-A-Ride terminal capable of creating any of the vehicles available in the DLC, and an ammunition vending machine in the back room. Scooter himself runs the front desk and Athena will take up a station in the back when she is rescued. 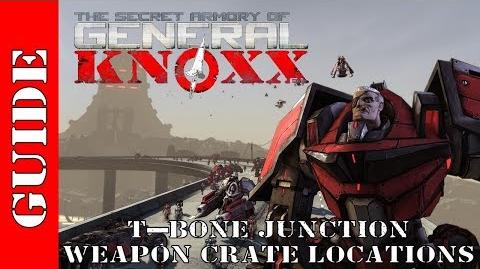 Retrieved from "https://borderlands.fandom.com/wiki/T-Bone_Junction?oldid=457627"
Community content is available under CC-BY-SA unless otherwise noted.