Systems Jammed is a main storyline mission in Borderlands: The Pre-Sequel.

This mission is automatically accepted when Marooned is turned in. Springs gives the Vault Hunters an Orbatron and directs them to Concordia. During the course of this mission, which takes place entirely within the confines of Concordia, the Vault Hunters get to know the city and its inhabitants.

After exiting Springs' place, the Vault Hunters must use a vehicle to jump the gap to the north part of Serenity's Waste. There is a travel exit to Concordia within the abandoned building at the very north of the area.

Continuing down the only path, Nurse Nina is met in her infirmary. She directs the Vault Hunters into a decontamination chamber, insisting they do not move; moving while under the beam does indeed inflict damage though the mission does not progress if they don't move. Nina offers a healing hypo and states that more health can be purchased at her healing vendor machines.

The path opens to the main level of Concordia. Jack contacts the Vault Hunters and orders them to meet with The Meriff. Activating the elevator leading to The Meriff's Office fails, however.

Jack then directs the Vault Hunters to the Up Over Bar, first to speak with Roland and Lilith, then to Moxxi. Moxxi says that some Moonstones need to be picked up from the CU5TM-TP. In order to retrieve the Moonstones, the CU5TM-TP must first be met at the Bank (where a free incendiary Maliwan SMG can be looted from), then followed to the Stash. At last, CU5TM-TP hands over the Moonstones which he carried on himself all along.

Moxxi states that the moonstones can be used as a currency at the Black Market and that one object must be purchased there in order to receive the transmitters needed. Following this, Moxxi marks the location of the first tower. After a short while, she adds a secondary waypoint near "Springs' Emporium o' Stuff" which can be used as a via point to reach the first tower. Alternatively, the jump pad near the Fast Travel station can be used to reach the lower roof level.

After inserting the first transmitter and hitting it with a melee attack, Moxxi indicates the location of the second tower, on the other side of the city at the same level. This tower is blocked by an electric force field, which must be deactivated by shooting or activating the nearby switch. A cable leading from the force field to the switch facilitates finding the latter. Upon insertion of the second transmitter, the third tower's location is shown.

The third tower is on the highest point of the city. Starting from the second tower, a double jump must be used to reach the top roof. Approaching the tower activates three turrets nearby which immediately attack and must be destroyed. Examining the tower reveals that it has been damaged and a relay drive gearbox must be salvaged from one of the turrets and placed in the tower.

Following this, Moxxi highlights a console near the first tower for the Vault Hunters to use. This results in Crisis Scar becoming the next location to examine. When the Vault Hunters attempt to leave Concordia at the marked Triton Flats exit, it becomes blocked. Moxxi must again be sought out at the bar. This time, however, she is not behind the counter, but in a back room, which can be accessed by activating the single one-armed bandit machine and pressing the button that pops out.

After talking with Moxxi again, she reveals another exit to Triton Flats. The mission can then be turned in at Moxxi.

"You found the jamming signal! Now don't just stand there twiddling your guns, go shut it down." 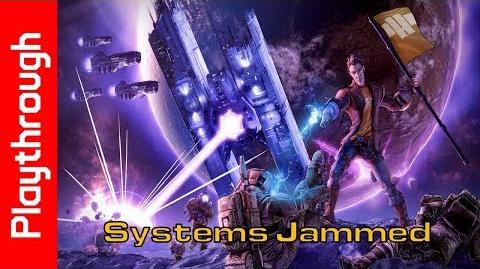 Retrieved from "https://borderlands.fandom.com/wiki/Systems_Jammed?oldid=451485"
Community content is available under CC-BY-SA unless otherwise noted.