What appears to be Handsome Jack is actually 5H4D0W-TP, and now he has the H-Source thanks to the Vault Hunters. The path that appears leads to 5H4D0W-TP's throne room, where he is tempting Claptrap's Consciousness to allow him to integrate and dominate the universe. When Claptrap refuses, 5H4D0W-TP taps into the H-Source's power and goes on a rampage.

5H4D0W-TP first creates a giant robot dubbed ECLIPSE, which is armed with multitudes of missiles and lasers. Cover is limited, so the jump pads must be used to stay on the move and away from ECLIPSE while pumping as much firepower as possible into the head. Small bug enemies will also appear to attack, distract, and provide Second Winds. There is a vertical jump pad that leads through a pipe and up to one of the upper ledges on the left (looking from the entrance) of the throne, (its mirror has no pipe and a jump pad on the top.) A Vault Hunter can use the jump pad to exit the pipe, fire off some rounds and then either falling back down or slamming whenever to cover. This will keep the Vault Hunter in constant motion, and provides cover the majority of the time, and is a good way of keeping the minion's fire off of them, however, it does not provide adequate cover to avoid EOS's laser, as the Vault Hunter will be exposed at the bottom of the pipe.

After ECLIPSE is destroyed, 5H4D0W-TP creates EOS (designed after Helios Station) and continues his onslaught. EOS circles the combat arena from a great distance, making sniper rifles and the Railgun, Splitter and Blaster lasers as the most effective weapons. Conversely, weapons that trade accuracy for damage (shotguns in particular) are able to easily land shots on EOS.

EOS's weak-point is the eye in the center, but only when it opens in preparation to fire a giant laser blast onto the field. EOS will also fire moonshot shots at and near Vault Hunters that spawn various glitches. These moonshots will damage Vault Hunters on direct hits. After EOS's shields and a portion of its health has been depleted, it will retreat to recharge the shields while viruses appear and projections of Lilith, Dr. Zed, and Tannis attempt to demoralize Claptrap and the Vault Hunters.

EOS also has massive health (the boss itself is an armored target) and shield pools, approaching the levels generally reserved for raid bosses (although not as extreme as ECLIPSE). Its offensive capability is extreme as well, and can easily send Vault Hunters into Fight For Your Life very quickly. During the battle, Bugs will constantly spawn (a maximum of 2 at any given moment), which can be used for second winds. Powerful corrosive and Shock weapons are critical to success in the fight as a consequence.

EOS has a number of main attacks:

In addition to its larger attacks, EOS has multiple turrets attached to it. These start out by firing shock blasts at the Vault Hunters and homing Missile turrets are added after the first recharge period. The turrets are vulnerable to corrosive damage, but like EOS, they have high health, and should not be a priority target.

When EOS' health level drops to 75% and 50%, it will despawn and recharge its shields to full, then rejoin the fight. Vault Hunters will not be targeted by it during this period, which roughly persists for a minute. Additionally, tougher enemies such as Glitches (most commonly badass glitches) will spawn, again with a maximum limit. If they are killed, more will spawn, but they will all vanish when EOS is about to return or is defeated.

Once EOS is finally defeated, 5H4D0W-TP will appear on its throne, lying on its back, the H-Source ready to be plucked out. 5H4D0W-TP will blow a raspberry and generate a large pool of good loot, including Moonstone, glitch and purple items. After the main bulk of the loot has dropped, a final legendary item is guaranteed to spawn, accompanied by another raspberry sound.

After the legendary item is dropped, the H-Source has to be returned to Handsome Jack. The mission is completed when the DLC's ending cutscene is played. 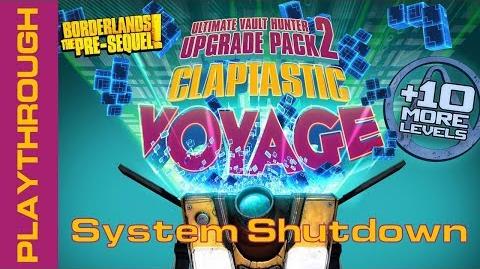