Swallowed Whole is an optional mission in Borderlands 2.

Scooter wants Shorty dead, but there has been a complication. Shorty has been swallowed whole by Sinkhole, a stalker residing at the end of Stalker Hollow.

Sinkhole initially appears at a point marked by a waypoint, invisible save for a blue glow emanating through from its stomach. It quickly retreats when discovered, forcing a hunt through Stalker Hollow and a number of lesser stalkers to catch up.

When Sinkhole is finally tracked, the blue glow from its belly presents a convenient beacon as to its location, even when cloaked. Sinkhole must be killed in order to release Shorty, and an optional objective is to get the kill with a shock weapon.

Once released, Shorty shows no hesitation in trying to kill his rescuer. He leaps at his opponent, with buzz axe in hand, and attempts to slash his victim until killed. 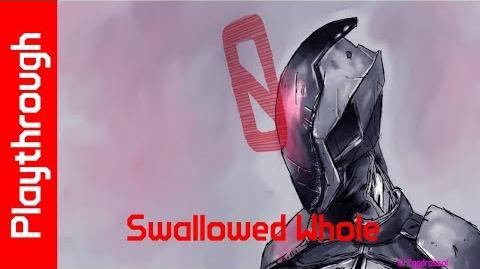