Sometimes lightning does strike twice – Deploys as a Tesla Grenade, then launches multiple smaller range, lower damage child Tesla grenades in an even distribution around the deployment point. Child grenades can stick to walls and other non-horizontal surfaces.

This dramatically increases the range of the grenade as a whole, and also dramatically increases the effective damage of the grenade, allowing for double or possibly even quadruple damage, depending on how many resultant grenades the target is within range of. Like standard Tesla grenades, the Storm Front is able to tell friend from foe and will not damage allies if they are within its range. However, the grenade will create a shock explosion when deploying child grenades, as well as another shock explosion upon its expiration as standard Tesla grenades do. The overlapped grouping of the child grenades' deployment makes it much more likely that Vault Hunters will take some slight damage when that occurs.

Although it can be generally described as a Tesla grenade with a much higher range and damage, the child grenades cast off by the Storm Front can be intercepted by obstacles, thus limiting its range depending on where it is deployed.

Child grenades stick to surfaces like walls, although the main grenade will not. Regardless of interception, all child grenades will still do their damage, making the Storm Front highly usable in enclosed spaces.The high damage and excellent range of the Storm Front make it useful for numerous applications, and the relatively neutral element allows it to be used as a mainstay for nearly any combat situation. It is particularly effective with any of Mad Moxxi's weapons and their damage-to-health effect, most prominently Grog Nozzle and the 65% health return for the amount of damage done, or Rubi and its 12% health return. This combination in particular can be startlingly effective, allowing for survival against truly phenomenal amounts of damage. 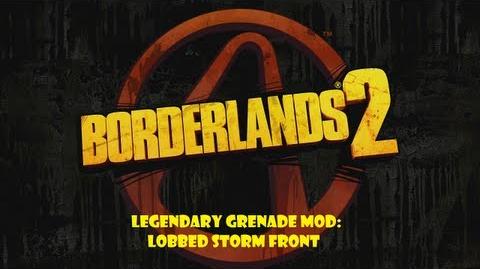