Stanton's Liver is a location in Borderlands: The Pre-Sequel.

Below Stanton's Liver is a cesspit of broken refuse. Torks have made their home here, feeding off the waste from the local scavs.

Hidden beyond a tunnel intersecting a rail tunnel near St. Pancreas, Higgins' Gully is an excavation site surrounding an ancient Eridian obelisk. The area is patrolled by a few Armored Outlaws, but otherwise the only thing of note is the obelisk itself. Stepping into the obelisk takes one on a brief journey through a wash of alien patterns to Piraud's Thrutch.

Piraud's Thrutch is a strange place with a breathable atmosphere and normal gravitational pull under a bright orange sky. The small amphitheatre hosts another Eridian obelisk, like that in Higgins' Gully. Stepping into this transports one into a room adorned with two paintings and a chest. Another obelisk in this room acts as a portal back to St. Pancreas.

Stanton's Liver is an extensive scav base in the middle of the area, inhabited by the Booster gang.

St. Pancreas is a run down railway station. The rail is broken in one direction, and blocked in the other, so no trains ever come here. The tracks leading into the tork-infested tunnel at one end offers something of interest as it leads to Higgins' Gully, and also offers a jump pad exit from the area back to Stanton's Gate. 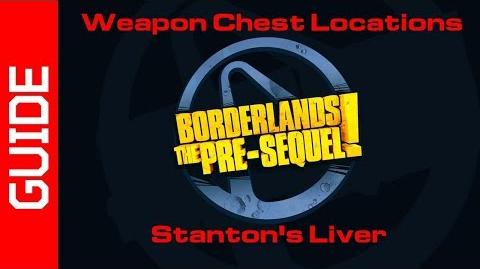