Stance Von Kofsky is a solitary individual living in the river bed in Rust Commons East.

Stance can be found leaning against his shed in the Southwest part of Rust Commons East in the flood plains. His shed is highly noticeable as there are very tall sunflowers growing around it. He is south of the Middle of Nowhere Outpost where the ground is completely flooded.

A few Spiderants will spring from the ground not far from Stance's shed. They will attack if provoked, however they are far enough away that it is usually possible to ignore them when the mission is accepted, or turned in. 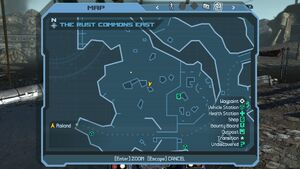 Stance Von Kofsky's only known involvement in the game is to give the mission Green Thumb, in which he complains about the water pipes irrigating some unwanted flowers around his home.

Retrieved from "https://borderlands.fandom.com/wiki/Stance_Von_Kofsky?oldid=408278"
Community content is available under CC-BY-SA unless otherwise noted.