Space Slam is an optional mission in Borderlands: The Pre-Sequel.

After completion of Boomshakalaka, this mission becomes available from Tog at the Court of Dreams area in Outlands Canyon. His challenge is to perform a slam attack on the basket, with the optional objective of doing so while aflame. A nearby jump pad is aimed at the basketball hoop across the court.

If attempting the optional objective of performing this mission while on fire, there are a number of fire barrels nearby with which to do so, notably one right next to the jump pad. Once alight, a very long and high jump off the jump pad ending in a slam directly onto the rim of the hoop, not the backboard, will complete both objectives. Once completed, Tog will perform a short congratulatory interview and the mission can then be turned in.

Any failed attempt to hit the rim will fail the mission, which can then be picked up from Tog again for another attempt. 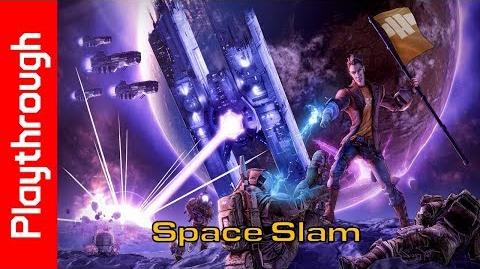