Southern Raceway is an area in Mr. Torgue's Campaign of Carnage DLC in Borderlands 2.

A small looping area near the north end of the map, home to mutated rakk that have learned to drink gasoline. The hive consists of Slagged and Chubby Rakk, posing a significant threat compared to most rakk groupings, but also providing a guaranteed way to get the Cute Loot achievement for killing a Chubby-variant enemy. The rakk in this area are encountered as part of the mission Gas Guzzlers.

A loosely round area containing a few ramps and driving paths. Home to the Monster Truck.

Several heavily armed game critics live here. They don't pull any punches in their reviews, which may have earned them a few enemies.

A large, round arena where Vault Hunters battle Motor Momma. 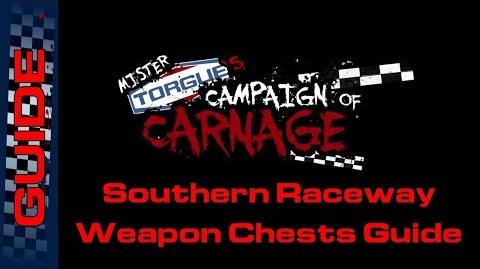 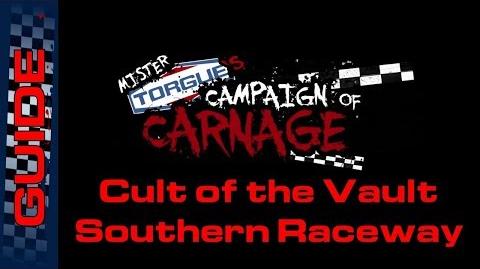 BL2 Southern Raceway Cult of the Vault Guide
Retrieved from "https://borderlands.fandom.com/wiki/Southern_Raceway?oldid=432675"
Community content is available under CC-BY-SA unless otherwise noted.