This article is about the weapon type. For other uses, see Sniper. 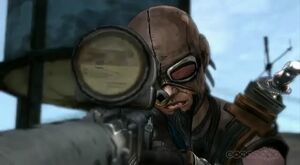 Sniper Rifles are accurate, often scoped, heavy weapons with an extreme damage-per-bullet rate balanced by a low fire rate and small magazine. They tend to have high accuracy when sighted, and low accuracy when not sighted. All sniper rifles have boosted critical hit damage, with pump-action models having a +200% boost while semi-automatic models have a +180% boost. Reload speed is not increased with a higher weapon proficiency level.

Sniper rifles are the predominant weapon of choice for long range precision shooting. With extremely high damage rates, a player can snipe at a group of enemies at a safe distance, methodically picking one enemy off after the other, however due to possible variations in the weapon and its capabilities (most notably accuracy), successfully hitting targets may be difficult to do from a safe distance.

Sniper rifles are very good against most enemies, although a few may present some problems. Skags can be difficult because they are armored and fast enough to avoid shots by sniper rifles, yet a marksman can still score a critical hit on one if the target stops to roar. Any enemies getting into melee range can also be troublesome and are generally eliminated more easily with closer ranged weapons.

When looking for a good long-range sniper rifle, several things should be taken into consideration:

Another important thing to take into account when choosing what sniper rifle is going to serve the best is an invisible quality known as stability. Stability only becomes a factor when sighting a sniper rifle, and it is measured in how fast the weapon stops swaying when first sighted, between shots, and when the user takes damage. Unfortunately, this quality isn't displayed on the item card and must actually be experienced before it is determined, so be careful when purchasing a sniper rifle from a vending machine and be prepared to sell it back. Negative Recoil Reduction values affect stability so avoid them even if the magazine is ample, the accuracy rate is high, and the damage/elemental ability is superior.

Elemental sniper rifles can add a mixed bag of tricks to a sniper's arsenal, however the different classes and different styles of play have a significant impact on optimal choices. The Trespass skill in particular gives a Hunter a strong reason to avoid elemental damage altogether seeing as the elemental damage will have to deplete the shield, whereas a regular bullet will apply all of its damage to the target without the shield's impediment.

As a general rule of thumb, if a one-shot kill is desired at great range, then an Accuracy figure of at least 98%, high damage, and a good level of zoom, on a pump-action rifle is desired. Semi-automatic models tend to be a poor choice due to their lower accuracy and 50% less critical hit damage.

If, on the other hand, it's more desirable to use a Sniper Rifle at medium range, within enemy range, then all three of the aforementioned stats become a lot less important. At these ranges, the damage stat is outweighed by rate of fire, and the magazine capacity/reload speed suddenly matter. Stability is critical at shorter ranges, and lower zoom is desirable. For this type of combat, semiautomatic models are far more viable due to high rate of fire. An S&S model with their 9-round magazines can be useful.

Sniper rifles return as the premier long-range weapon in Borderlands 2. Although scope sway no longer decays to nothing, all sniper rifles in Borderlands 2 have perfect accuracy when scoped (barring any effects that decrease accuracy). The accuracy is moved to scope sway, which is generally negligible for sniper rifles other than those of Hyperion manufacture. The bullet travel time can still take account, especially with high connection ping.

Some character skills can influence the effectiveness of sniping tactics. Zer0's action skill Decepti0n offers a decoy to detract incoming fire, while his Sniping is dedicated to precision shooting. In contrast, Salvador and Krieg are less effective with sniper rifles, as Salvador cannot use a scope while Gunzerking, and Krieg's skill set is well suited to combat at close range. Gaige's Ordered Chaos skill tree provides an effective way to earn Anarchy stacks when having zero or low stacks, but the accuracy reduction with increasing Anarchy stacks becomes prohibitive to sniping.

Retrieved from "https://borderlands.fandom.com/wiki/Sniper_Rifle?oldid=436419"
Community content is available under CC-BY-SA unless otherwise noted.