Sledge: Battle For The Badlands

Sledge:
Battle For The Badlands

Sledge: To The Safe House

Sledge: Battle For The Badlands is a story mission in Borderlands given by Shep Sanders. It is the fourth and final into series of four missions which lead to the demise of Sledge. This mission unlocks the final exit from the Arid Badlands region after Sledge is defeat.

"It's time to push the attack! Infiltrate Headstone Mine and kill Sledge. If you get the chance, grab that Eridian Artifact of his. As Dr. Zed put it, nobody wants another bandit to find it and start another blood-fuelled crusade for the Vault. If you manage to come out of this fight alive, head on back to Zed and let him know what happened." 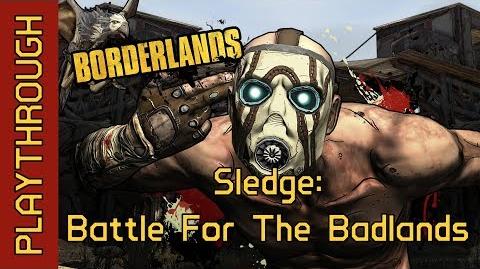 Once inside the entrance to Headstone Mine there is a lengthy path looping a long way around to the south, and almost the entire area is inhabited by hostile bandits. From the entrance, the front area is well guarded and leads to a ramp to the right of a closed gate. A switch at the top will open the gate to proceed directly into the open area beyond, or alternatively a more circuitous route with plentiful cover can be taken by moving through the buildings at the top of the ramp. Overlooking the open ground is a Mulciber Mk 2 covering the path deeper in. Beyond the area and past the Mulciber is a mine tunnel leading to a lengthy area with limited cover and long range combat opportunities on open ground.

Once at Sledge's lair, an elevator leads up to an upper level with a Med Vendor and Ammo Vendor at the save point. Sledge can be found in a chamber at the end of a long corridor.

Sledge's shield is twice as strong as average, and he has very high health (about 2.5x as much as a Bruiser). Additionally, he is well armored, only taking 75% damage from shots to the torso. He also has armor plates on his arms and thighs which significantly reduce the damage taken to those locations down to only 20%, and wears a thick metal helmet which protects him from headshots unless shot in the glass slit or the exposed back of the head.

Sledge has two main attacks; Sledge's Shotgun and Sledge's Hammer. His shotgun has a very poor accuracy but a high damage and wide spread. The hammer has high direct damage and sends out a shock wave when hitting the ground. The shock wave is an area of effect attack that will damage and knock enemies back. Sledge will try to move into melee range throughout the entire fight. Avoiding close contact is recommended, instead moving and placing obstacles between the character and Sledge. In some cases it may be preferable to risk close contact briefly in order to escape, than allow a character to be backed into a corner.

Shock damage is especially useful in depleting Sledge's powerful shield. Rapid-fire attacks from combat rifles or SMGs are useful in chipping away at Sledge's health, wearing down his life while preventing his shield from regenerating. Elemental damage over time will also help with this. critical hits can aid the speed at which Sledge can be taken down, however Sledge's only critical hit location is the red glass on his welder's helmet or the back of his head, making this a more difficult proposition for this boss. Additionally, missing the critical hit spot and hitting Sledge in his helmet will cause him to greatly increase in speed for several seconds, making it much easier for him to catch up to the player with his close range attacks.

After the fight begins, bandits will spawn from both sides of the room. Some may be useful to leave alive as a means to gain a Second Wind. The design of the room is such that characters can loop around a large physical barrier on the right hand side after entering. This obstruction will allow some opportunity to recharge depleted shields before the attack is resumed. The room contains a few potentially fatal dead ends as well.

When Sledge is defeated, loot his chest and collect the artifact. A door will then open in the east wall of Sledge's lair allowing a quick shortcut back to the entrance area, thus bypassing most of the respawned bandits.

"I hardly believe you managed to take down Sledge! I'll put in the word to Helena, and I'm sure if I tell her your story, she'll give you the clearance you need to enter the Dahl Headlands."