This article is about an explorable area of Borderlands. For other uses, see Gully.

Skag Gully is a wild and largely unsettled area nestled in the mountainous region east of The Arid Badlands. Marked by harsh terrain of steep cliffs and winding canyons, the area is home to a dense skag population, and to Nine-Toes, the game's first boss enemy, who presides over a small bandit settlement in a cavern at the southern edge of the map.

While there isn't much information provided in-game about this area, what appears to be a caved-in mine shaft near the entrance and several abandoned camps located throughout indicate the limited success of attempts at human settlement.

Below is a map of Skag Gully with prominent items marked. 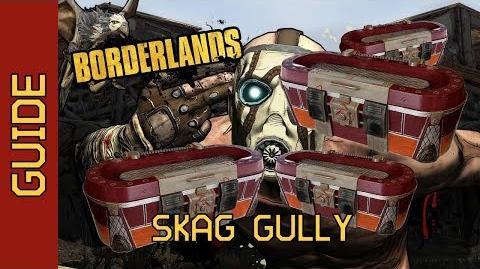 Retrieved from "https://borderlands.fandom.com/wiki/Skag_Gully?oldid=432680"
Community content is available under CC-BY-SA unless otherwise noted.