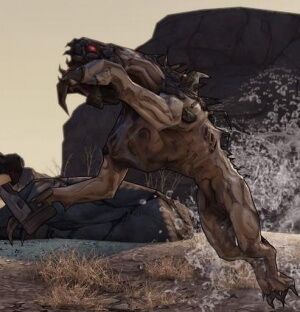 Skags dwell in underground burrows. Though skags primarily carve out their burrows by using their hard, hook-like claws to dig, the molded appearance of their den entrances evidences the use of corrosive compounds - common to some types of skag - to break down the Pandoran stone. Skags seem to behave like meerkats, with most of the pack inside the den and a few roaming just outside.

Skags' distinctive mouths consist of a relatively immobile lower jaw supporting two vertically aligned upper jaws which, when opened, seemingly cause the face to split. Despite the ferocious appearance of their mouths, skags do not appear to have teeth. Instead, a series of barbs extends from the end of their lower jaw and along both edges of their upper jaws. This suggests that skags might ingest prey in the same manner as alligators on Earth - by ripping apart the flesh rather than biting it in chunks.

Skags' tongues grow with age. When at the 'elder' stage of maturity and fully extended, this strong, potentially prehensile organ may be up to twice as long as the body.

As suggested by the appearance of Skrappy, Pinky & Digit, Dukino, Benjamin Blue, and further reinforced in The Secret Armory of General Knoxx, skags can be tamed, at least partially. The Midgets have been observed riding the smaller variants of skags (although sporadically they mount even the Alphas and Elemental strains). How they manage to tame these wild beasts remains unknown.

Skags are armored brutes that typically attack in groups of 3-6 individuals mobbing their prey. They are moderately tough, and all breeds sport appreciably armored areas around their head, shoulders, and along their back. The armor on these sections is thick enough to cause some trouble - even the weakest skag pup will take only half damage when shot in the head or shoulder as opposed to the gut, causing the character to waste ammo while more skags crawl out of their dens. Fortunately, skags have a weak spot - their open mouths can be exploited when they stop and roar.

Shotguns, and to a lesser extent revolvers, work extremely well against skags, despite half the damage being absorbed by their frontal armor. Like other weapons, shotguns can cause a tremendous amount of damage to a skag when fired into an opened mouth. The rate of fire between shots and poor recoil handling make aiming for the soft flanks or open mouth a must. Combat Rifles are another good choice, since skags, like Spiderants and Lance Defenders, flinch and become agitated after suffering multiple heavy hits to the armored spots. When agitated, skags start to shake with anger and roar, exposing their vulnerable mouth to the line of fire. Assault rifle-style combat rifles not only deal tremendous critical damage, but generally hit hard and accurately enough to make flanking shots from the hip feasible. Repeater Pistols and Submachine Guns are best used only for taking down the smaller breeds. Sniper Rifles can take down a skag with one hit to the open mouth, and at a distance can reliably hit the flanks. Rocket Launchers are effective in general if the matching element was used.

Skags are vulnerable to Incendiary damage, which causes about 33% additional damage (though still reduced by armor), and 1.5 times the damage a like-leveled enemy would take per second from the triggered effect. Larger, more developed skags have more armor and are thus more vulnerable to corrosive damage than younger skags. The "Alpha Skag" and their Badass forms are the most heavily armored of all skag species. Spitter and Elder Skag are completely immune to Corrosion.

Save for Benjamin Blue, skags are mostly absent Borderlands: The Pre-Sequel. However, a digital robotic version of them can be found in the Claptastic Voyage DLC. Clapdogs are robotic, digital versions of skags which live inside Claptrap's mind. They are allies of Insecurity forces and are nearly always found fighting alongside them, and rarely spawn without them.

When found in the map Subconscious, Clapdogs have a different name and skin, but otherwise act identically.