Alistair Hammerlock was originally from Hermes, sharing a strained relationship with his sister Aurelia.

He is a hunter who dresses in a ragged, futuristic version of a Victorian adventurer's outfit. His artificial appendages are prosthetics acquired as replacements for limbs lost during an encounter with a thresher named Old Slappy. He is also responsible for introducing threshers to Pandora from Elpis.

Sir Hammerlock is the first friendly human encountered in Borderlands 2, trapped in Southern Shelf while researching bullymongs. He agrees to repair Claptrap's eye after the Vault Hunters clear out Liar's Berg, and then begins to send the Vault Hunters out on various research expeditions on the local fauna for his as yet unpublished almanac. He soon relocates to Sanctuary, where he continues to serve as a mission provider.

Hammerlock can also be seen among the patrons of the Badass Crater Bar, although he is comparatively inactive in this area.

He becomes a central figure in the Sir Hammerlock's Big Game Hunt DLC, where he guides the Vault Hunters through their adventures on the continent of Aegrus. He is initially found at a hidden camp site in Hunter's Grotto, before taking up residence in the Aegrus Sophisticates' Lodge.

Hammerlock returns in Borderlands 3 as a supporting character. He is the love interest of Wainwright Jakobs, the heir to the Jakobs family name and an ally to the Vault Hunters. Together with Wainwright and the Vault Hunters, Hammerlock assists in defeating Aurelia Hammerlock and retrieving the Eden-6 vault key, although Hammerlock himself tries to reason with his sister and ends up being shot in the process. Hammerlock resides in his quarters upon Sanctuary III after the Cold as the Grave story mission.

He is a central character in the Guns, Love, and Tentacles DLC, as the Vault Hunters head to the planet of Xylourgos to attend his wedding to Wainwright Jakobs. 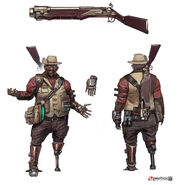 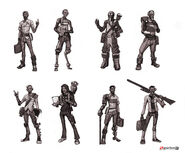 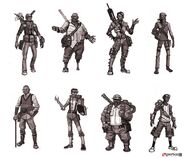 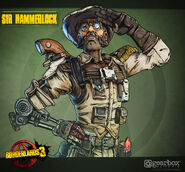