For the skill of the same name, see Showdown (Nisha).

Showdown is an optional mission in Borderlands 2. The Sheriff has kept Lynchwood under an iron-fisted rule for far too long, and a bounty has been posted on her head.

"It's time to take down the Sheriff."

The Sheriff, Deputy Winger, and a handful of marshals can be found at the bend in the road halfway up Gunslinger's Corner. Some of them will be on the rooftops, creating an awkward dynamic to the fight. As with the rest of Lynchwood's inhabitants, all of these units are level scaled (to a maximum of 30 in Normal Mode).

The Sheriff is the only real objective, while the others provide interference. She has slightly more health than an equal-leveled Bruiser, and also possesses an almost equally tough shield. She comes armed with a pistol and tends to stick to the rooftops, but will jump down to street level to pursue if the action moves away from her, even chasing Vault Hunters down to the lowest part of Gunslinger's Corner if led that far.

Deputy Winger and the marshals are slow-moving and easily outrun. They do not seek cover, but are inherently tough, and those on rooftops are often in difficult targeting positions. Unlike the other Marshals, Deputy Winger is equipped with a shield and has more health.

Two bonus objectives make the fight even more awkward. Killing the Sheriff with a pistol limits the weapon options used to deliver the final shot, although other weapons can be employed in bringing her health down without nullifying the bonus objective. Avoiding shooting her deputy further pressures player choices towards precision armaments. Any damage from the character, such as grenade splash damage, will cause the objective to fail. Skills such as Cloud Kill, Helios, or Ruin tend to hinder Maya in achieving this objective. On the other hand, Axton's Sentry Turret and Gaige's Deathtrap can kill the Deputy without causing the objective to fail (

To achieve the optional objectives more easily, one can run past the marshals before the fight starts and reach the upper platform of Gunslinger's Corner. After jumping over the trunk chest, the Sheriff can be shot (with a Dart so shots home in on the Sheriff) while the roof blocks the view of the marshals as well as the Deputy.

"Handsome Jack's girlfriend is now dead, and you are now the Sheriff of Lynchwood. Busy day, all things considered."

Turn In: Lynchwood Bounty Board 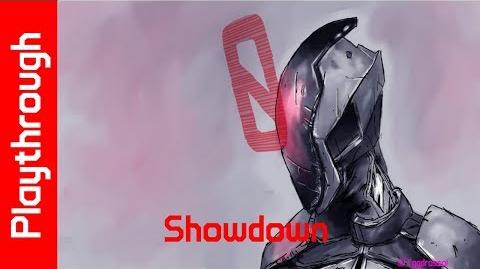 Showdown
Retrieved from "https://borderlands.fandom.com/wiki/Showdown_(mission)?oldid=438225"
Community content is available under CC-BY-SA unless otherwise noted.