Shep Sanders is located in the Arid Badlands at Outpost Arid Hills, near the transition point to the Arid Hills. He stands in the metal shack leaning against a wall next to a medical vendor, where he keeps an eye on the bandits in the area.

Shep Sanders was once a foreman for the Dahl corporation. After Dahl pulled out of Pandora, Shep and his family were left behind. According to Dr. Zed, Sledge skinned Shep's entire family, and made a tent out of their hides. He later sold out New Haven's location to Hyperion. In return, Brick gouged his eyes out and cracked his skull open, causing him to be banished from Sanctuary. 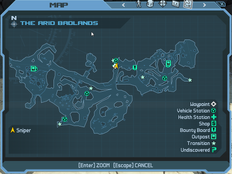 Retrieved from "https://borderlands.fandom.com/wiki/Shep_Sanders?oldid=278572"
Community content is available under CC-BY-SA unless otherwise noted.