Scylla's Grove is a misty swamp area in Sir Hammerlock's Big Game Hunt. The gloomy swamplands are hemmed in by walls of rock that form a network of tunnel-like gorges throughout the area. Savages occupy a few isolated encampments and a collection of structures bordering on the Sun Swamps that some might consider a town.

The Ardorton Docks is a small camp located in the central-southern part of the map. Apart from Catch-A-Boat station and one Totem chest, there is nothing much of interest here.

Dropwater Cavern is a gorge below the Sun Swamps with pipes protruding from the rock walls around the cavern. At its deepest part is a connection to Ardorton Station. The cavern is inhabited by various scaylions.

Grifter's Reach is a camp located in the southernmost part of the map. Fairly strong contingent of Savages inhabits the area. In the far corner of the area, there is a Totem chest, medical vending machine, and human barbecue site.

Low Gut Rut is a camp located in the easternmost part of the map with a very strong presence of Savages. Several weapon chests, the Vault symbol, and human barbecue site can be found in this camp. There is a Catch-A-Boat station nearby, too.

Roothill Village is a secluded village perched high above a ramshackle series of structures overlooking the Sun Swamps. Once it is cleared of savages the village becomes a minor staging point in Scylla's Grove, and is equipped with a Fast Travel station.

The Sun Swamps, as the name suggests, is a large swamp covering most of the central portion of the map. Fan Boats frequently patrol these waters. 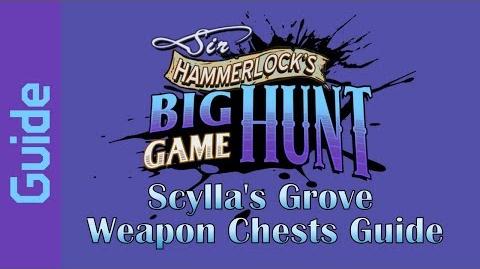 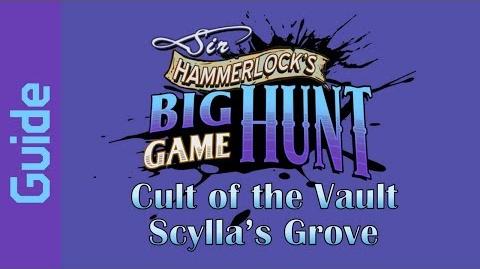 BL2 Scylla's Grove Cult of the Vault Guide
Retrieved from "https://borderlands.fandom.com/wiki/Scylla%27s_Grove?oldid=465689"
Community content is available under CC-BY-SA unless otherwise noted.