Scryer's Crypt is a forbidden region of Nekrotafeyo that encompasses the decaying Eridian tomb of The Seer, a precognitive Guardian bent on maintaining a pre-determined timeline for unknown agendas.

The entry point of Scryer's Crypt. Starting off as a forested path with the usual vending machines and Fast Travel station, it opens to reveal the front entrance of the Eridian structure. Below the structure is a marsh that contains a mysterious liquid that impairs Vault Hunters, slowly weakening them while summoning cloaked Revenants to attack. Nekrobugs commonly roam the area, usually around the steps leading to the tomb's door.

Cage of the Seer

A large empty chamber that serves as a sort of foyer for the tomb. At the end of the room is a large drop that leads to the next area. To the left of the drop is a secret ledge that sometimes contains a white chest.

A ruined L-shaped corridor filled with debris and Nekrobugs. Pockets of the room are filled with the mysterious liquid, which will attract Revenants if stepped in. At the end of the corridor is a large room that other Guardians will spawn at from nearby spawners. This room also has a secret ravine containing ammo chests and a single white chest. On the left side of the room is a small tunnel leading into the next area.

The tunnel will lead to a small square-shaped cavern that contains several pillars that the Vault Hunters must traverse to reach the next room. The mysterious liquid is present in this room at the entrance, and continues pouring into the cavern reservoir. To the left of the exit of the room is a lone pillar that holds a red chest. Additionally within this room is a smaller version of the cube found at Desolation's Edge, though it cannot be opened.

Exiting the cavern through the small passage across from the red chest's pillar will lead to a semi-foggy chamber housing several enemies and a mysterious orrery at the far wall. Below the orrery is a ravine that contains two vending machines and several ammo chests. These utilities are next to an opening in the ground that will drop off to the final area.

A massive underground chamber filled with mysterious cubes suspended in the air. Much of the surface of the room is covered by the mysterious liquid, though the center is mostly solid. This area serves as the boss arena for the fight against The Seer. Defeating The Seer will open a corridor at the far wall housing a red chest and an exit-only Fast Travel station. 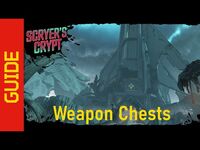