Power to the People

Scooter's Used Car Parts is an optional mission in Borderlands given by Scooter. It becomes available after Seek Out Tannis is complete.

"Scooter here. Somebody's been really hard on the Runners lately, and we're not going to see a shipment of replacement parts anytime soon. There are probably plenty of spare parts we could salvage out in the Commons. Take this list and return with the parts, and I'll pay you for 'em." 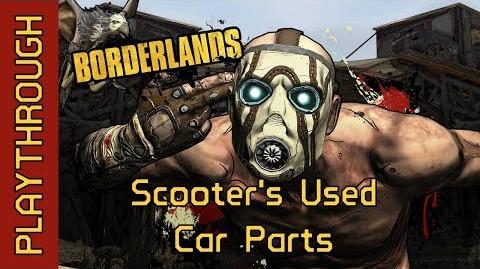 Collect all the vehicle parts and return to Scooter.

The used car parts that Scooter requires are scattered around an enclosed area bordering Crazy Earl's Scrapyard. The Outeryard Fast Travel outpost is nearby and provides a convenient approach to one of the yard's two entrances. Entering the area not only brings one to the location of the car parts, but also into a fire fight with a number of bandits. A Gatling Turret mounted high the middle of the yard also provides a further hazard for intruders to be wary of.

Follow the compass waypoints to each target objective and collect them. Their approximate location is shown on the map by letters:

"Thanks, man. With these parts I should be able to keep the Runners running. Somebody's been abusing them like rental cars. You wouldn't happen to know anything about that, would you?"