Scavenger: Shotgun is one of the six Scavenger missions throughout the Borderlands. This mission becomes available on Middle Of Nowhere Bounty Board after the completion of its repair.

"There are components to a shotgun scattered around. If you find all of these components, I can reassemble the weapon for you. Bring me the Body, Magazine, Stock, and Barrel." 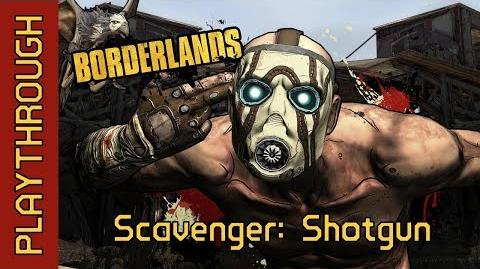 Find all of the shotgun parts.

Hop in a runner and travel to the area marked on the map.

An even easier approach is to get near to the building and jump until the Green Trophy sign can be seen. As soon as it shows up (usually during mid jump) simply press X (on 360) as it appears and grab it.

"Great! Here is your shotgun, good as new."