Scavenger: Revolver is one of the six Scavenger missions throughout the Borderlands. This mission becomes available on Lucky's Bounty Board after Powering the Fast Travel Network is complete.

"There are components to a revolver scattered around. If you find all of these components, I can reassemble the weapon for you. Bring me the Body, Cylinder, Sight, and Barrel." 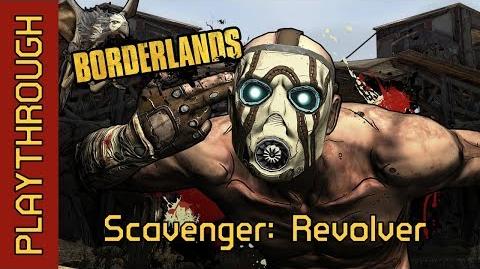 Find all of the revolver parts.

Grab a car, and head to the Catch-A-Ride directly west of the base of the big mountain/hill in the middle of the headlands. It is on the edge of the map. All of the parts are found on the little hilltop around the Catch-a-Ride. It should be noted that the map waypoint shows the general area of all four parts and does not show the location of each individual piece.

Return to Lucky's Bounty Board for the reward.

"Great! Here is your revolver, good as new."