Scavenger: Machine Gun is one of the six Scavenger missions throughout the Borderlands. The completion of The Final Piece is required for the appearance of this mission on Middle Of Nowhere Bounty Board that gives it.

"There are components to machine gun scattered around. If you find all of these components, I can reassemble the weapon for you. Bring me the Body, Magazine, Stock, and Barrel." 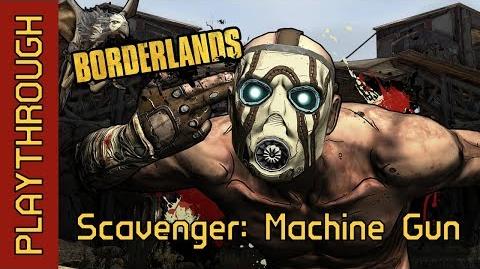 Find all of the machine gun parts.

The gun parts are hidden amid the buildings of Thor Digtown and the encampment itself is populated with some well armed and aggressive enemies. The way point only shows the general area.

"I was able to assemble those parts into a complete weapon. Here's your new machine gun. Enjoy!"