Sawtooth Cauldron is an area in Borderlands 2. It is an open valley with a central rock outcrop dominating the middle. This rocky peak forms the foundation of the bandit stronghold known as Inferno Tower. Beneath it lies a lake of lava. The surrounding area is carved up into various bandit encampments.

Avie's Camp is an open area between the Main Street Reservoir and the Buzzard Nest. It is empty save for a weapons chest and portable toilet. The only way to access this area is to drop down into it from the Buzzard Nest, and doing so completes the Happy Camper challenge.

The Buzzard nest is a launching platform for buzzards. Bandit enemies spawn here, along with several buzzards. There are no boundaries on the platform edges, so some care must be taken not to stray close to the edge during combat. Ulysses can be found here, as well as one of the History of Pandora ECHOs chronicling Zer0's history. The only access to the Buzzard Nest is via elevator up from Smoking Guano Grotto after Mortar has been lured out during the mission Toil and Trouble. There is also two white loot chests among the pipes below the surface of the Nest. They are accesible via a ladder near the stairs to the rear and right of the elevator (as one faces outward from inside). The ladder can be seen from the map's main entrance using a scope.

Cramfist's Foundry is a reinforced bandit stronghold with several buzzard pads and some bandit turrets adding to its defensive measures. A lava-filled chasm provides an additional hazard for people fighting on the approach to the main foundry area. There is a difficult fenced off treasure room at the back of the area with a ladder adjacent to a cliff that will kill anyone slipping off the edge.

This location has two main areas: A long street sloping down, with bandit-filled shacks on both sides, and a shallow pool of water with a hill at the bottom. Goliaths, nomads, psychos, and marauders will emerge onto the street to attack anyone venturing into their territory. The pond at the bottom is home to threshers, and these will attack Vault Hunters and bandits alike if disturbed. The pond also hold mission objectives for Capture the Flags and The Chosen One.

Sawtooth Stilts is an area near the connection to Eridium Blight. It is a multi-level bandit shanty-town built on stilts in a crater. It also spawns large numbers of bandits. Multiple kinds of marauders, and most kinds of nomads, psychos, midgets, and several goliaths are all in evidence here. The tightly packed nature of the houses gives plenty of spawn points, and the bandits will come in multiple waves. It might be best to knock the helmets off some goliaths to add some chaos among the enemy ranks.

This is a wide, relatively flat-bottomed crater with a few bandit houses, but the more notable threat comes from threshers and buzzards. There are multiple varieties of threshers, and buzzards will come in from the Buzzard's Nest, sometimes as many as three at once.

Smoking Guano Grotto is a lava pit cavern containing a network of catwalks and bandit shacks throughout. There is a red weapons chest on one of the lower platforms, and reaching this and leaving entails jumping over lava to land on a ladder in order to climb back out. An elevator from this area is the only way to ascend to the Buzzard Nest.

The following missions take place partially or entirely within the Sawtooth Cauldron area:

Near the southern edge of the map, there are five barrels that, when shot in the proper order, results in a Patricia Tannis Easter egg. The order is shock, incendiary, corrosive, explosive, then finally slag. The corrosive (green) barrel is well out into the water, and it can be tricky to find a position where it can be targeted without straying past the guardian tower's fire zone. The barrel further inland near the huts on the pond (which can spawn as any of the types) has no part in this sequence.

Followed by this barrel 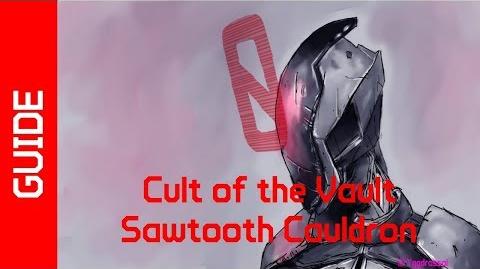 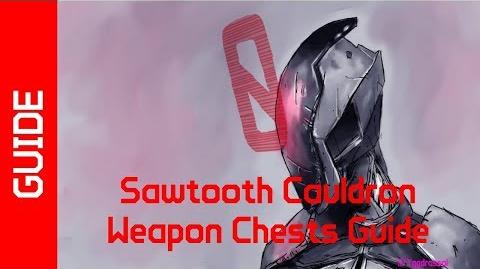 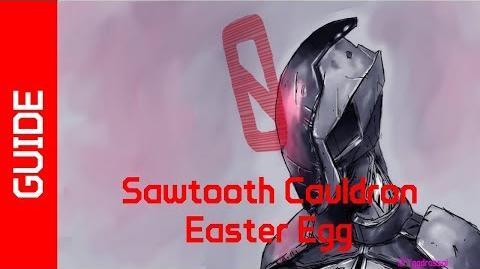