Sanctuary is a city built on top of Dahl's prime mining ship of the same name, sent to Pandora to mine precious minerals from an area now known as the Caustic Caverns. When the Dahl corporation left Pandora after its unsuccessful ventures, they left their prized mining ship behind, still covering up the failed mining site.

In Borderlands, Sanctuary is inaccessible for several reasons. Helena Pierce tells the Vault Hunters that she has cut off access to Sanctuary because of Baron Flynt's presence in The Salt Flats, and that she didn't want innocent people getting killed by his tribe and their "infernal contraption". After Baron Flynt's demise, Crimson Lance forces under Commandant Steele's command fight the bandit inhabitants of the city.

Following the opening of the Vault and the destruction of the Crimson Lance, Sanctuary was soon overrun by a group of bandits known as the Bloodshot gang. Roland later forced them out of the city and claimed Sanctuary as the primary base of operations for the Crimson Raiders, a resistance force comprising of bandits and the remaining Crimson Lance forces. Roland sent out distress signals to the remaining civilian population persuading them to reach Sanctuary before Hyperion killed them. He also ensured the safe arrival of people such as Dr. Zed, Marcus Kincaid and Patricia Tannis. It has since become the last bastion of safety from Handsome Jack and the Hyperion corporation. After yet another attack by Jack, the city was turned airborne and teleported to the Highlands by Lilith. The outer edge of the city is left behind at the mining ship's berth, Sanctuary Hole.

During Commander Lilith & the Fight for Sanctuary, Sanctuary was overrun by Colonel Hector and his New Pandora forces. Lilith was able to teleport many of the town's inhabitants away, but in their absence, the town became infested with the botanical overgrowth caused by Hector's infection. Eventually, in order to banish Hector, she was forced to destroy the city.

The Black Market is a store run by Crazy Earl on the east side of Sanctuary. Storage Deck Upgrades can be purchased here using Eridium.

Located on the north side of Sanctuary, the Crimson Raiders HQ contains the bank. Patricia Tannis can be found inside. The town's rooftops are accessible by jumping off the second-floor balcony. The entrance is flanked by a guard and both an Ammo Dump and Gun$ machine. The red Dahl weapons chest is only accessible at the conclusion of the mission Bearer of Bad News.

There is a welder that plays very distorted audio messages on the ground floor.

Sanctuary's medical facility is a small clinic run by Dr. Zed. There are two med vendors here, and Zed himself also buys and sells defensive items, with his inventory being an extension of the med vendor inside the left of the entrance. An Ammo Dump is just outside the door. Inside the Clinic, inside one of the open morgue doors, a QR code is present, that when scanned reveals the message: "Thanks so much for playing our game, now I'm rich with love AND money! !!Nick Wilson!! Ditto!!!"

Marcus Kincaid has a store on the northeast side of Sanctuary. It comes equipped with an Ammo Dump, a shooting range (with a live target), and Marcus himself. Gun purchases and sales are conducted by selecting Marcus directly. There is a Zed's Meds outside the entrance.

Moxxi's is a bar on the east side of Sanctuary. Mad Moxxi and Sir Hammerlock can be found here. There are two slot machines beside the entrance that provide prizes such as cash, weapons and Eridium (along with the occasional exploding grenade); the cost to play them varies based on the storyline level. Cumulatively large contributions to Moxxi's tip jar will result in gifts to the Vault Hunter. Also, talking with Moxxi will reveal snippets of backstory. A vault symbol can be found just outside of Moxxi's.

This Just In News Stand

A booth carrying ECHOs of "This Just In!" is located in the southwestern corner of the town square, providing the town with Hyperion propaganda news. The recordings are updated after the completion of most story missions.

Pierce Station is located just east of town square. Both a Quick Change and a Fast Travel station are located here. A Vault Hunter carrying a Golden Key can open the chest here. A Bounty Board is directly to the south of Pierce Station.

Scooter's is located on the west side of Sanctuary and is visible upon first entering the city proper. It is accessed via the vehicle doors or a door at the top of the steps to the right of the vehicle doors. A vault symbol can be found here.

The Secret Stash is located in the northwestern section of Sanctuary, across from Claptrap's home. It allows players to share up to four items between their characters. It is inaccessible until the mission Claptrap's Secret Stash is completed. 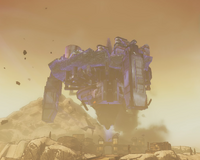 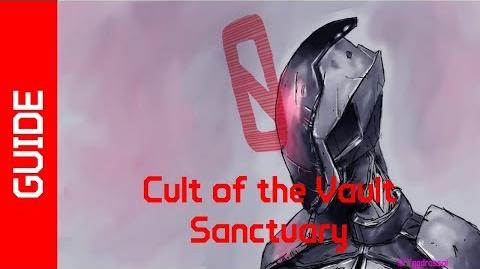