Intelligences of the Artificial Persuasion and Treasures of ECHO Madre

Rough Love is an optional mission in Borderlands: The Pre-Sequel that is first made available after both Intelligences of the Artificial Persuasion and Treasures of ECHO Madre are completed.

Nurse Nina needs your help to find true love and test the strength of her unknowing suitors.

Nurse Nina explains her loneliness issues and requests the Vault Hunters to pick up her gift of a card and flowers before sending them to Triton Flats. The first waypoint leads to Meat Head, who is located on a small balcony at the rear door of the first oxygen-rich building at So Much Serenity. After giving him the gifts, Nina wants the Vault Hunters to test Meat Head's strength against cryo damage, which turns him hostile. Causing him to shatter using a cryo weapon after having frozen him completes the optional objective. After the gifts are recollected, Nina sends the Vault Hunters to Outlands Canyon.

The second waypoint leads to Drongo Bones, who is located on top of the bluff at Bogan's Warren. After giving the gifts to him, Nina requests Drongo Bones' strength be tested against corrosive damage, which turns him hostile. Killing him with a corrosive weapon while he is under a corrosive damage-over-time completes the optional objective.

After the gifts are recollected, the final waypoint leads the Vault Hunters to the opposite end of Outlands Canyon, where the final suitor, Timber Logwood, is located. He is found inside the highest building behind the pumping station, above where the missions Boomshakalaka and Space Slam are begun. When the gifts are given to him, he will refuse Nina's offer which will make her angry and request the Vault Hunters kill him with incendiary damage. When his health is almost depleted, Nina will ask the Vault Hunters to stop attacking, admitting she finds him too handsome to kill. If the final blow was caused by an incendiary weapon while he is under a fire damage-over-time, the optional objective will be completed.

Timber will then confess his admiration for Nina, stating that he was testing her seriousness for a relationship. At this point, the mission is completed and can be turned in to Nina back in Concordia. After the mission's completion, Timber Logwood will remain in Nurse Nina's infirmary for the remainder of the game, strung up by his wrists. He can be interacted with, which will cause him to state his happiness and eager anticipation for the healing of his wounds so the relationship can go further, to which the Vault Hunter closest to him will respond with a unique dialogue.

"Surely there is an inspiring lesson to be learned here, right? " 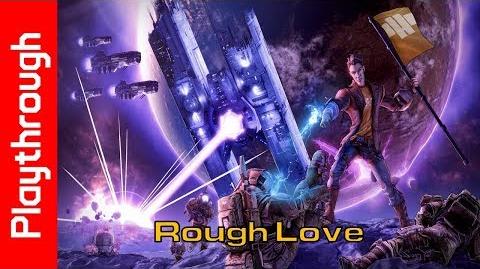