Rose Tinting is a side mission in the Borderlands: The Pre-Sequel DLC Claptastic Voyage.

MINAC, Claptrap's giant weapon of war from back in his Interplanetary Ninja Assassin days, doesn't want to be a repressed memory anymore. He wants the Vault Hunters to make it a happy memory so it can integrate with Claptrap's systems again. First, it wants its front cannon to shoot something nice and not-deadly. Grab the basketball hoop and some detergent from the marked spots. MINAC will show you a hostile turret that must be destroyed to continue.

Next, a paint job. There is a barrel of paint turned on its side nearby. Stand behind it and walk it up the ramp to the big cannon nearby. The game will automatically control it's movement, so only bumping into it is enough. A few turns of the wheels, a pull of the trigger, and MINAC is both looking and feeling more colorful.

Unfortunately, this registers as a threat to its combat programming. MINAC unwittingly deploys MINAC Minions (Re-skinned insecurity units) and it will also reveal the other six turrets one-by-one, only doing so after the previous one is destroyed. Destroy them all and MINAC will stop the programming, completing the mission. 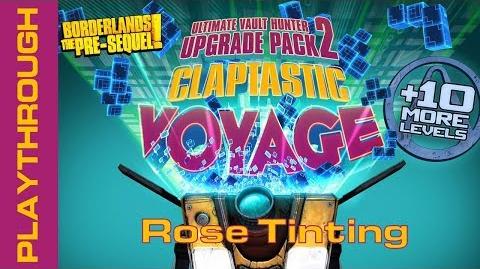