Roland is Borderlands "Soldier" class. He is originally from the planet Promethea and is a former soldier of the Crimson Lance, the highly trained private military of the Atlas corporation. He is proficient with all weapons, although he prefers shotguns and combat rifles. Roland can deploy a Scorpio Turret that can be upgraded throughout the game.

Atlas records state that Roland was honorably discharged from the Crimson Lance. Unfortunately, Crimson Lance doctrine states that the only type of discharge is dishonorable, which generally involves a bullet through the skull. When questioned about either his involvement in or departure from the Crimson Lance, Roland quickly changes the subject to loot, of which he firmly believes there is always room for more.

(Information taken from the Borderlands manual)

After the opening of the Vault and the defeat of General Knoxx, Lilith and Roland traveled to Pandora's moon Elpis on a vacation trip. There was where they met Jack for the first time, who asked them for help against Colonel Zarpedon through the Vault Hunters. They didn't want to have anything to do with that at first, but they ended up helping when they realized the true danger behind the attacks. So, they cooperated with Jack and the Vault Hunters to recover the Helios station and its main weapon, a giant laser, until they saw how Jack killed three scientists throwing them into space on the suspicion that one of them might be a spy. Lilith didn't want to continue helping him, but Roland kept acting normally and then made a plan in order to defeat Zarpedon while also preventing Jack from using the laser. They keep helping but, with Mad Moxxi's help, at the end they destroyed the laser and almost the entire Helios station.

Before the events of Borderlands 2

Following the Vault Hunters' defeat of General Knoxx, the Atlas Corporation abandoned all remaining Crimson Lance soldiers on Pandora. Roland used this opportunity to rally the Lancemen against Hyperion, pledging to give them a cause their previous employer could not promise them, forming the Crimson Raiders, along with Mordecai, Brick, and his then-girlfriend Lilith.

The Raiders were originally stationed in New Haven, but was discovered when Shep Sanders disclosed its location to Hyperion. Overrun by the company, and with Lilith believed dead by Hyperion, the Raiders relocated to Sanctuary. Roland then ended his relationship with Lilith to focus on defending the town, while she drew the bandits' attention away.

Before meeting with the new Vault Hunters, Roland was captured by the Bloodshots, a bandit group who attempted to claim the bounty on his head. With the assistance of Lilith, the Vault Hunters rescue him from Hyperion. He then resumes his post as the leader of the Raiders and assigns story quests to the Vault Hunters.

During the Crimson Raider/Slab joint strike on Control Core Angel, he assists the Vault Hunters in retrieving the Vault Key. In the core of the facility, he lowers the shields guarding Angel's Eridium injectors, while the Vault Hunters destroy them. Against Roland and Angel's insistence, Lilith appears as well. When Angel dies, Roland goes to retrieve the Vault Key, but is shot dead by Handsome Jack. After Jack is defeated, Roland is buried with the original vault hunters tearfully mourning him.

A manifestation of Roland becomes part of the plot of Tiny Tina's Assault on Dragon Keep, where he is added in randomly at points whenever Tiny Tina wants to, and was meant to be a necessary player in Tina's game would it not be for his untimely demise, ultimately representing how Tina can't let go of Roland. Roland acts the same (AI wise), deploying his Scorpio Turret and assisting the player, he will always use common (or white) rarity weapons and is clad in white armour instead of his normal attire to fit with the theme. His choice of words when speaking are clearly inspired by Tina's speech patterns rather than the actual Roland's. Roland, in said game, identifies himself as a White Knight of the Queen. After the original Vault Hunters finish their game, they gather at Roland's memorial statue, joined by Claptrap and the new Vault Hunters, where Tina says her farewell.

Roland does not appear in the game personally, however there is a town on Pandora named after him, with a large memorial statue that bears affectionate comments from all of the principal characters of the series. Presumably, he is buried here.

Roland's Action Skill is a sentry gun called the Scorpio Turret; a turret that shoots enemies and also provides a shield for cover. Roland's turret will be affected in one of three ways depending on which skill tree the player decides to fully upgrade. The turret lasts 20 seconds. The Scorpio Turret is a very versatile ability, when used correctly it can fill a wide range of situations, such as being used to cover the player's side to keep from being flanked, or temporarily holding off enemies while the player retreats. The Scorpio Turret is also the longest skill to cool down, mainly due to its devastating capabilities.

Some of Roland's abilities are meant to supplement and support the party, while some boost his offensive capabilities. His Infantry skill tree can boost his weapon damage, while his Medic skill tree will increase health regeneration, and Support will increase shield regeneration and regenerate ammunition for the party. Some of these benefits are only active when Roland's Scorpio Turret is deployed. He is by far the best support class because his turret can be upgraded to heal and regenerate ammunition for him and his allies. He is the only character that cannot boost his melee in some way, but his upgrades for the Scorpio Turret are more spread out among his skill trees, making it potentially more useful in more situations than the other character's action skills (except Lilith, whose skills are spread out about the same amount). Roland is the only playable character who does not have an action skill to daze enemies and has the only action skill capable of being taken out by weapons fire aside from character death. 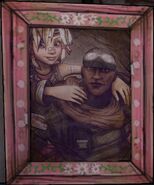 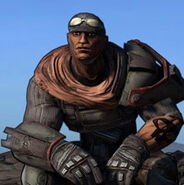