Road Warriors: Hot Shots is a story mission in the Dahl Headlands to eliminate runner patrols.

"Mad Mel has blocked the road to New Haven, and he spends most of his time terrorizing the southern part of the Headland. He hardly ever comes up here. If you want him to face you, you'll need to get his attention first. What says 'I'm going to kick your ass' better than killing a bunch of his men and destroying a lot of his hardware?" 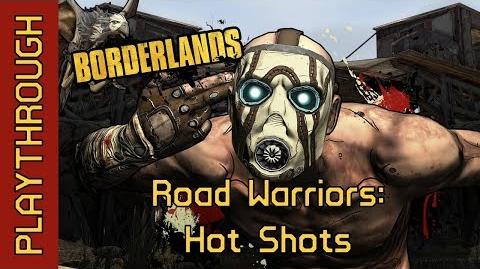 The final step to reaching Mad Mel involves eliminating various bandit patrols in the Dahl Headlands. The bandits can be found meandering all around the mountain in the middle of the headland in Out Riders. The Mad Mel Patrol is noticeably different from the regular Out Rider patrols normally found in this area however. They field the regular blue vehicle armed with a machine gun turret as well as an unusual red variant armed with a rocket turret, and in Playthrough 1 they are also marginally higher level than the usual Level 17 Out Riders in this area.

To eliminate the patrols, either drive around and engage them in vehicle-to-vehicle battles, or use a Runner to lure them to defensive positions where pedestrians have a chance of gunning them apart without being run over. In a vehicle it is recommended to keep moving at high speed to avoid fire, while maintaining a target lock with an Outrunner's turret gun. The machine gun turret is effective out in the open and at long ranges, while the rocket turret excels at closer ranges and if the patrols can be drawn into rocks where their movements are impeded, or stopped altogether.

One safe zone is the gate up to the home of Ernest Whitting. This can be used to flee the patrols if need be and the ramp at the top of this location can provide useful cover for snipers. The patrols often get caught up on the rocks below if they are lured into this area, making easy targets for pedestrians or vehicles alike.

Another place to make easy work of killing bandit patrols is from the hill where the Scavenger: Revolver mission takes place. If the vehicle is parked and facing north, the bandit patrols will come up one or two at a time and circle around below, making easy targets of themselves.

Return to Lucky to get the next part of the main storyline.

"This is a great start. Every bandit Runner you destroy weakens Mad Mel that much more."

"Oh he had you blow up some of my rides? Bandit or no, those were some pristine tail-gettin' machines!" "Hey is Lucky only sending you on mission that like, destroy my stuff? Seriously, I think he's putting bad guys in runner just so you can get on to blowin'em up."