Playable character (Tales from the Borderlands)

Rhys Strongfork is the current CEO of the Atlas corporation, a former middle manager of Hyperion, and one of the two main protagonists of Tales from the Borderlands.

Rhys is an ambitious man, and once dreamt of becoming the next Handsome Jack, trying his best to fill in his shoes. He got along with two co-workers, Vaughn and Yvette, but maintained a rivalry with Vasquez.

Rhys' most notable features are his ECHO eye implant, which allows him to scan objects and reveal information about them; and his mechanical right arm, which has a built-in interface. Rhys got his cyberware to help him get ahead in the data-mining department. It was paid for by his quarterly bonus, which he received for arranging a lucrative (though controversial) Eridium mining deal. While his old ECHO eye gave him access to all the information from the Hyperion database, it's unknown what features his current ECHO eye has, though it would presumably be accessing the Atlas database.

While heading to his boss' office to earn his promotion, Rhys finds out that Vasquez has taken over the position by force, demoting Rhys to "assistant vice janitor". Having overheard Vasquez talking about purchasing a Vault Key, he then heads to Pandora with Vaughn to purchase the key using Hyperion's funds. It isn't long before he and Vaughn accidentally stir up trouble with the local bandits led by Rudiger and after requesting a Loader Bot to defuse the situation, the two of them enter the World of Curiosities, an antique shop owned by Shade. There, they find the body of Nakayama, taking his ID chip before meeting up with the dealer, August, and his girlfriend Sasha. Unbeknownst to Rhys, Vaughn and August, the key was a forgery made by Fiona, Sasha and their adoptive mentor Felix. As soon as they discover this, the deal is then crashed by the bandit leader Bossanova and Zer0. Bossanova escapes with the money, while Rhys and Vaughn take shelter within Felix's van and makes an alliance with him, Fiona and Sasha, leaving behind a vengeful August.

Rhys attempts to track the money using the ID drive he retrieved from Professor Nakayama's corpse in the antique shop. After plugging the drive into himself, Rhys collapses and blacks out. While he is unconscious, the rest of the group finds Bossanova's base, an abandoned Atlas warehouse. After Rhys wakes up, the group proceeds to infiltrate the facility. While Felix stays behind in the van as the getaway driver, Rhys and Sasha are separated from Vaughn and Fiona, who get recruited into a bandit death race. Rhys and Sasha find a lift leading to the arena, but while trying to get it moving, Rhys' systems begin to malfunction, and he accidentally releases skags from nearby cages. While Rhys is attempting to make the lift work, a mysterious voice begins to taunt him. As Rhys manages to activate the lift, Zer0 arrives and helps them escape. The three of them arrive at the center of the arena, where Bossanova is hosting the death race. Rhys struggles to stay alive, but the briefcase is tossed around the racing arena, where Fiona and Vaughn are participating. Felix eventually recovers the case, but then announces his betrayal to Fiona. He attempts to open the case, not knowing there is a bomb linked to Vaughn's bio signature inside. The bomb explodes, destroying all the money inside and depending on player choice, either killing Felix or causing him to flee. As the group tries to figure out what to do next, Loader bot returns and causes Rhys to accidentally find an underground room containing Atlas prototype tech, including a strange item displaying a map of a Vault. At this point, the voice inside Rhys' head gets clearer, and as he turns around, he finds a hologram of Handsome Jack greeting him.

The Vault Hunters bring the Gigamind back to Rhys, but make him promise to help them get to the Vault. Reluctantly, Rhys agrees, and downloads the information on Maliwan's troops, battle plans, and movements. He tells the Vault Hunters that Maliwan is after Vault Key pieces, and have sent troops to Athenas to steal one.

Rhys calls the Vault Hunters back to Promethea after they collect the Key piece on Athenas. He needs help shutting down Maliwan's laser, which is being powered by the second Key piece. He has the Vault Hunters meet him at his ship, but before they can travel to Maliwan's base, Katagawa destroys the ship. Rhys gives the Vault Hunters an Atlas Viper Drive to hack a Maliwan shuttle instead. Once the Vault Hunters reach the base, Rhys helps walk them through the process of reaching the laser. He hacks a Death Sphere and uses it to gain access to the control room.

Rhys invites the Vault Hunters to Atlas HQ to give them the third Vault Key piece. However, as soon as they arrive, the Atlas defenses are sabotaged and Maliwan forces start invading. Rhys frantically tries to find Zer0 to help fight off Maliwan, and instructs the Vault Hunters on how to help get the defenses back online. Evidence starts suggesting that Zer0 betrayed Atlas, but Rhys refuses to believe it until he starts getting attacked by Zer0 in a Maliwan suit. As Maliwan Zer0 is about to kill Rhys, the real Zer0 shows up to save his friend. Maliwan Zer0 is revealed to be Katagawa in disguise, and the Vault Hunters have to kill him.

After Katagawa is defeated, Rhys asks the Vault Hunters what they think of his mustache, then gives them the Key piece.

Episodes (Tales from the Borderlands)

Rhys, due to his cybernetics, is an excellent hacker. With some modifications by AI Jack, he can hack many different programs. 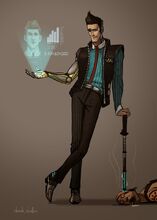 Retrieved from "https://borderlands.fandom.com/wiki/Rhys?oldid=442729"
Community content is available under CC-BY-SA unless otherwise noted.