For other uses, see Revolver. 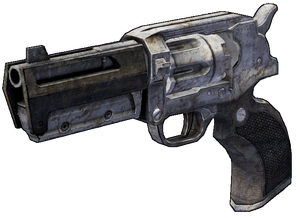 Revolvers are powerful family of small one-handed guns, for what they lack in both firing rate and reload speed, they make up for with damage and accuracy. Revolvers are a great weapon for anyone exploring Pandora, and are named with strong cowboy and lawbringer themes, such as "Law" and "Justice".

Revolvers can have a bladed accessory that doubles the power of melee attacks. This can be useful for killing a heavily wounded enemy without expending bullets, or waiting for a reload to complete.

Revolvers have their own ammunition, but share proficiency with repeater pistols.

Every shot from a revolver is guaranteed to give at least a x1 elemental effect, with a chance of the stronger effects for x2, x3, or x4 guns.

In Borderlands, revolvers are produced by Atlas, Dahl, Jakobs, Maliwan, and Tediore.

Revolvers (like most subtypes of weapons) were phased out in Borderlands 2 in favour of the more general Pistol weapon type, with only Jakobs, Maliwan and Torgue making aesthetically similar weapons to the revolver [1].

Generally speaking, the revolver serves as a sort of hybrid that shares characteristics with both sniper rifles and repeater pistols. Increased critical damage, effectiveness at long-range, high accuracy and often scopes are important features associated with revolvers. When sighted, a revolver acts much like a sniper rifle, albeit a weaker one in most cases. Because of their minimal size and weight, a revolver will not sway like a sniper rifle. When firing from the hip, there should be little difference between revolvers and repeaters, save the damage. Because of their reliability and critical hit power, they make a great weapon to pull out during a reload, or a good weapon to open up a fight with by head-shotting a target. This becomes much easier with a scoped revolver. Revolvers are best suited for use against targets with high health, which move slowly and have large critical hit areas.

Revolvers are a good choice in a heated firefight if they are used effectively for headshots, but are less helpful when not placing critical hits. Players who are unable to aim for headshots while moving might be better off using a revolver for ranged combat and smaller encounters.

Revolvers are also useful in close quarters. A bladed revolver can create a great shoot-slash combo when next to an enemy and is useful for gaining Second Winds from melee-based opponents. This can deal massive damage.

The masher revolver serves as a longer ranged shotgun. These revolvers tend to have extremely high damage when added up. Scoring a critical hit with one of these will most likely kill or significantly damage a target.

Retrieved from "https://borderlands.fandom.com/wiki/Revolver_(Borderlands)?oldid=436455"
Community content is available under CC-BY-SA unless otherwise noted.