Revolver parts are fairly simple, as any combination of parts may spawn together to make a particular revolver. The only unusual feature of revolvers is the stock, which does not change the appearance of the weapon, although it (or its absence) still affects the weapon's performance.

Note: Revolver parts also include a grip. However, the grip does not affect any of the weapon's attributes. Each grip design is specific to the weapon's manufacturer.

Like most weapons, a revolver's name derives from the particular body, stock, and magazine parts that comprise it. 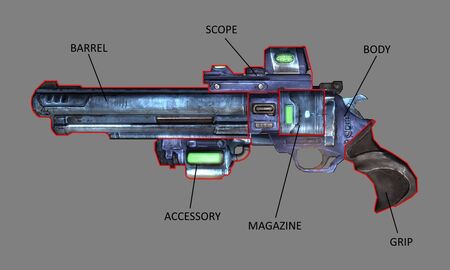 The body of a revolver is easy to identify, since the model name declares it straightforwardly. Where no model name appears, as is the case in many unique revolvers, the body type can be determined by the shape and position of the hammer, the trigger, and the trigger guard. (not to be confused with the protrusion immediately above the hammer, which is part of the barrel.)

The revolver stock is completely specified within the weapon's model number, which is fortunate as the part is completely invisible in-game. Determining the stock on a Unique revolver without a model number is challenging, typically requiring either access to the debug console or by doing performance comparisons with other revolvers.

The revolver magazine is specified within the weapon's model number, which is fortunate as they can be difficult to differentiate visually. Still, determining the magazine on a unique revolver without a model number is not too difficult, first by counting the revolver's ammo capacity, then for six-shooters comparing the damage and rate of fire with similar weapons.

Primarily, the magazine specifies the number of rounds of ammunition carried by the revolver; beyond that, it influences weapon damage and reload speed, and can affect rate of fire and the weapon's tech level as well.

While revolver barrels do not affect the weapon's model number, they are easy to distinguish visually from their shape at the end of the barrel. The barrel also specifies the shape of the process above the hammer at the back end of the gun, immediately visible in first-person mode when wielding the weapon. Revolver barrels strongly affect the revolver's damage and accuracy, and can influence recoil reduction and weapon tech level as well.

As with all weapons in Borderlands, the grip does not affect any of the revolver's attributes. Each grip design is specific to the weapon's manufacturer, therefore each revolver of the same manufacturer will have the same grip.

Revolver sights are easily distinguished by the zoom statistic published on the weapon's gun card. They have no further effect on the weapon's attributes. Certain gunfighting styles may nevertheless favor certain sights, either for ease when firing from the hip or for improved peripheral-field visibility or magnification at range.

On a revolver, the front "sight" blade at the far end of the weapon is logically derived from its barrel, whereas on repeaters this would be specified by the sight part.

The weapon's published zoom statistic may include a bonus for the manufacturer and material grade (e.g., Jakobs material 2 "ZZ"). The following table summarizes zooms for weapons with no such modifier present.

Unlike other parts, the accessory part does not have a consistent effect on a weapon's attributes: some accessories boost tech, some alter recoil reduction, some diminish damage. Most accessories grant a special property to the weapon, such as elemental damage or melee behavior, beyond mere attribute modification; furthermore, all accessories make their weapon eligible for a special name prefix or title describing the weapon's altered behavior, such as "Vitriolic" or "Razor."

Most accessories are easy to differentiate visually. They always appear under the barrel, immediately in front of the cylinder. If the revolver has barrel1, or the accessory is melee, the accessory may project slightly beyond the end of the barrel.

There are two possible melee accessories, acc1_bladed and acc1_razor. Each appears are a large recurved blade, protruding beyond the end of even the longest barrel. A melee accessory on a revolver dramatically improves melee damage while the revolver is wielded, at the expense of slower strikes (the animation takes a little more time to recover between strikes).

The melee accessory appears in in two varieties, offering 100% and 200% additional damage. The first level makes the weapon eligible for the "Bladed" prefix, while the second makes it eligible for the "Razor" title. In addition, the second level (Razor) greatly increases weapon equip speed. The two levels are not otherwise visually distinguishable.

The masher accessory acc2_masher appears as a metallic appendage with squared-off ends.Masher revolvers fire seven projectiles with each pull of the trigger, at the cost of a single round of ammunition, after the manner of a shotgun. Each projectile by itself does less damage than a comparable single revolver bullet, though their aggregate damage (when multiple projectiles strike) is formidable. Mashers suffer a much greater projectile spread (that is, diminished accuracy), and generate considerably more recoil per shot.

A revolver with a masher accessory is eligible for the "Masher" title.

There are four different elemental accessories, acc3_corrosive, acc3_shock, acc5_explosive, and acc5_incendiary, corresponding to the four different varieties of elemental damage. Each glow in the color corresponding to their element, making them easily identifiable. Elemental accessories grant shots fired from the revolver elemental properties, imposing a -40% damage penalty in exchange.

A revolver with an elemental accessory is eligible for various elemental prefixes, depending on the weapon's element and net tech level.

The accessory of the unique Madjack resembles one of these accessories, as do those of the legendary Chimera and Defiler.

The stabilizer accessory acc4_stabilized appears on the weapon as a metallic, bulbous capsule. It diminishes recoil from shots fired by 20% and speeds accuracy recovery about as much as stock3 (50%).

A revolver with the stabilizer accessory is eligible for the "Stabilized" prefix.

The part acc_none serves as a placeholder for a weapon with conventional behavior, nothing more. A revolver with this non-part will have no accessory visible beneath the barrel.

Other than unique drops, a revolver name consists of the name of its body, a model number comprising stock and magazine, a possible manufacturer-specific material code, a prefix derived from its attributes or accessory, and a title.

The first element of the revolver name is a simple function of its body part. To recap:

There are no legendary revolver stocks or magazines, so this rule describes every possible model number.

The title is determined either from the weapon's overall attributes, its accessory, or a legendary part. If the weapon does not qualify for any of these, its title defaults to "Revolver."

Retrieved from "https://borderlands.fandom.com/wiki/Revolver/parts?oldid=436519"
Community content is available under CC-BY-SA unless otherwise noted.