The Voyage of Captain Chef

Assist Captain Chef in claiming Elpis for king and country.

This mission is completed by surviving waves of different enemies such as scavs, lil' scavs, raiders, and lunatics while defending the powered flagpole raising the flag and assisting Captain Chef in keeping his salute up as well at the same time.

As soon as the flagpole is activated, enemies will randomly spawn from the buildings nearby located north of the flagpole. There is an oxygen geyser in the middle of the hold-out area and an underground area nearby also provides an atmosphere.

Additional objectives to restart the stuck generator, and locate and place a broom, become active during the attack. These can be done at leisure after the scavs have been dealt with, or pauses in the fighting can be used to attend to Captain Chef's requests. Either way once both the flag-raising tasks and the kill objective is complete the mission can be turned in to Captain Chef. 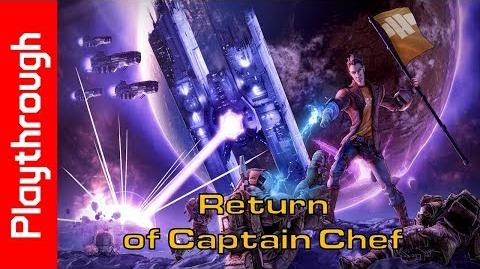 Return of Captain Chef
Retrieved from "https://borderlands.fandom.com/wiki/Return_of_Captain_Chef?oldid=416717"
Community content is available under CC-BY-SA unless otherwise noted.