The Retcher's reload effect is modified from the behavior of a standard Tediore Splatgun. The two grenades are launched at a much higher arc than normal, typically such that they will impact the ceiling of virtually any indoor location. Because the grenades detonate on impact, the usefulness of this feature is limited, especially since the blast radius of the child grenades is very small. Confusingly, the child grenades are explosive rather than corrosive, despite being green in color.

Overall, the performance on the Retcher is very similar to that of a generic Tediore Splatgun, even with the shortened projectile arc. Its reduced ammo usage makes it much more damage-efficient than E-tech Splatguns, especially with the Gentle prefix, and gives it a greater number of shots per magazine, but it also lacks the increased status effect chance of a Splatgun. 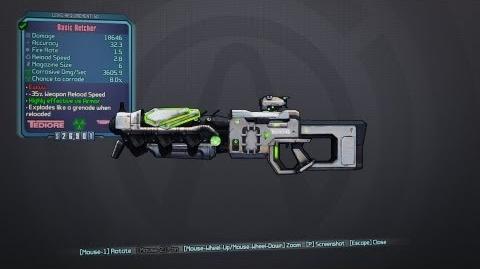