Repeaters fall into two families, differentiated by their bodies: repeating pistols, and machine pistols. The two varieties of repeater have different magazines, but share most other parts, though certain accessories are unique to one or the other. Repeaters lack a stock entirely, but have a part unique to repeaters, the action.

Note: Repeater and machine pistol parts also include a grip. However, the grip does not affect any of the weapon's attributes. Each grip design is specific to the weapon's manufacturer.

A repeater's name derives from the body and magazine parts present on the weapon. 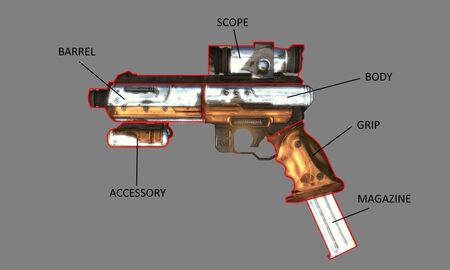 The body of a repeater is easy to identify, since the model name declares it straightforwardly. Where no model name appears, as is the case in many unique repeaters, the body type can be determined most easily by the shape of the trigger and the trigger guard. The shape of the hammer is less reliable for body identification than it is on a revolver, since some actions on repeating pistols conceal the hammer.

A repeater with body5 is a machine pistol, a weapon with a much different appearance and operating characteristics from a standard repeating pistol.

Repeater magazines are easy to identify. For most repeaters, the model name contains a numeric code describing the magazine. For unique repeaters without an explicit model name, higher-capacity magazines will be seen visibly protruding from the weapon grip. Finally, simply counting the ammunition capacity of the weapon will identify the magazine.

The two varieties of high-capacity repeater magazine are identical in appearance. The magazine of the legendary Rebel resembles neither of these, but rather a high-capacity machine pistol magazine.

On a machine pistol, the magazine has no effect on the reload speed.

The action is a part unique to repeaters. It does not appear in the weapon's model name, and indeed can be challenging to identify visually on the gun card, particularly on machine pistols where the body enshrouds the rear of the action. On a repeating pistol, the most straightforward way to identify the weapon's action is by examining the rear of the weapon while it is equipped in first-person perspective.[1]

Repeater action strongly affect the weapon's rate of fire and recoil handling, and can influence weapon damage and tech level as well.

As with all weapons in Borderlands, the grip does not affect any of the pistol's attributes. Each grip design is specific to the weapon's manufacturer, therefore each repeater and machine pistol of the same manufacturer will have the same grip.

*Hyperion, S&S Munitions, and Vladof produce both repeater pistols and machine pistols. They use the same grip for both.

Repeater sights are easily distinguished by the zoom statistic published on the weapon's gun card. Other than a slight tech boost with the most advanced sight, they have no effect on the weapon's other attributes. Certain combat styles may nevertheless favor certain sights, either for ease when firing from the hip or for improved peripheral-field visibility.

Unlike other parts, the accessory part does not have a consistent effect on a weapon's attributes: some accessories boost tech, some alter recoil, some vary accuracy. Most accessories grant a special property to the weapon, such as elemental damage or melee behavior, beyond mere attribute modification; furthermore, almost all accessories make their weapon eligible for a special name prefix or title describing the weapon's altered behavior, such as "Vitriolic" or "Lacerator."

Most accessories are easy to differentiate visually. They always appear under the barrel, in front of the trigger guard. If the repeater has barrel0, or the accessory is melee, the accessory may project slightly beyond the end of the barrel.

While most accessories are common to both repeating pistols and machine pistols, a few will appear only on one or the other.

There are two possible melee accessories, acc1_fanged and acc1_lacerator. Each appears are a large quarter-circle blade somewhat resembling a mezzaluna, protruding beyond the end of even the longest barrel. A melee accessory dramatically improves melee damage while the pistol is wielded, at the expense of slower strikes (the animation takes a little more time to recover between strikes).

The accessory of the unique The Clipper resembles a standard melee accessory, as does that of the legendary Reaper.

The double-shot accessory acc4_doubleshot appears as a large metallic appendage with a second barrel protruding from its front, beneath the main barrel. Double repeating pistols fire two projectiles with each pull of the trigger, while double machine pistols fire two projectiles with every cycling of their action, expending two rounds of ammunition per shot in either case. Accuracy spread is greatly increased (+75%), i.e. accuracy is decreased, and the two bullets do less damage apiece (-18%). The weapon gains 20% in magazine capacity.

A repeater with a double-shot accessory is eligible for the "Double" prefix.

The accessory of the legendary Gemini resembles a standard double-shot accessory,

There are four different elemental accessories, acc5_corrosive, acc5_shock, acc5_explosive, and acc5_incendiary, corresponding to the four different varieties of elemental damage. Each glow in the color corresponding to their element, making them easily identifiable. Elemental accessories grant shots fired from the weapon elemental properties, imposing a -40% damage penalty in exchange.

A repeater with an elemental accessory is eligible for various elemental prefixes, depending on the weapon's element and net tech level.

The accessories of the legendary Hornet and Firehawk resemble one of these accessories, as does that of the pearlescent Nemesis.

The laser accessory acc3_lasersight appears on the weapon as a small appendage located near the end of front of the barrel, projecting a bit below it. It speeds accuracy recovery slightly (+10%), but greatly improves the accuracy minimum (-120%), making the very first shot taken much more accurate. When the weapon is aimed, it provides a further improvement to weapon spread (-100%), beyond any on-aim bonus provided by a sight part.

The laser sight accessory is unusual in that it does not confer any unique prefix on the weapon.

The stabilizer accessory acc4_stabilized appears on the weapon as a large metallic appendage extending the length of the barrel, immediately in front of the trigger guard. It diminishes recoil from shots fired (-100%) and greatly speeds accuracy recovery (+100%). Since repeaters do not have stocks, this accessory has a substantial effect, more so than its equivalent on a revolver.

A weapon with the stabilizer accessory is eligible for the "Stabilized" prefix.

The accessory of the legendary Troll resembles a standard stabilizer accessory, as do the cold and rage accessories (v.i.).

The cold accessory only appears on machine pistols. In appearance it resembles the stabilizer accessory.

Cold machine pistols receive a +4 bonus to tech, a +70% damage bonus, a +100% improvement in accuracy recovery, and a -100% reduction in recoil. Projectiles fired receive a +200% knockback bonus, but travel at -300% velocity, far slower than Lilith's High Velocity skill can completely accommodate.

A machine pistol with the cold accessory is eligible for the "Cold" prefix.

The rage accessory only appears on machine pistols. In appearance it resembles the stabilizer accessory.

By itself, the accessory merely confers a +4 bonus to weapon tech, seemingly pointless as the accessory has no elemental activity. However, every non-Legendary machine pistol with the rage accessory receives the "Rage" title. Rage machine pistols fire 5-round bursts instead of the full-auto of conventional machine pistols, and receive a 100% rate of fire increase, but suffer a +100% recoil penalty.

The part acc_none serves as a placeholder for a weapon with conventional behavior, nothing more. A repeater with this non-part will have no accessory visible beneath the barrel.

Other than unique drops, a repeater name consists of the name of its body,

The first element of the repeater or machine pistol name is a simple function of its body part. To recap:

Since repeaters and machine pistols have different magazines, they will have disjoint magazine numbers. In either case the number is a straightforward function of which magazine is present.

The title is determined either from the weapon's overall attributes, its accessory, or a legendary part. If the weapon does not qualify for any of these, its title defaults to "Repeater," or "Machine Pistol" if it has body5.

Retrieved from "https://borderlands.fandom.com/wiki/Repeater/parts?oldid=436522"
Community content is available under CC-BY-SA unless otherwise noted.