RedBelly are two bosses in Borderlands: The Pre-Sequel that appears in Crisis Scar. Red and Belly are a pair of Scav leaders.
Red is a Lil' Scav wearing a full-sized helmet who sits atop Belly to appear as one figure.

The Merrif, being forced by Colonel Zarpedon to surrender to the Lost Legion, agreed to support with a jamming signal that disables Helios's defenses. The override signal is protected by Red and Belly, leaders of their own scav gang.

Red and Belly challenge the Vaunt Hunters to a fight after they intrude the old facility to disable the jamming signal. Both are killed in the fight. 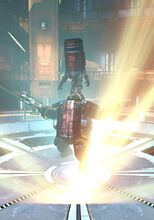 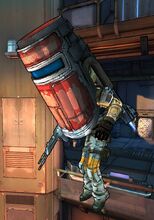 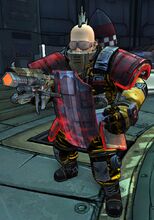