Red, Then Dead is an optional mission in Borderlands: The Pre-Sequel.

Kill couriers to get ECHO evidence.

"The color makes them expendable."

This mission is available from the main bounty board in the Lunar Launching Station. Three Lost Legion couriers carry ECHO recorders containing evidence of Jack's misdeeds. In attempt to get Jack fired, Tassiter requests the Vault Hunters to locate the couriers, kill them, and retrieve the recorders they carry.

The first courier is located in the Moonshot Supply Depot area, who must be killed for the ECHO log he is carrying.

After the first courier is killed, the Lost Legion requests more armor and better weapons on the couriers to protect them from the vault hunter. The second courier (Lost Legion Powersuit Noob), is located to the east, geared up in a powersuit, which he does not know how to use. He will receive quick instructions on how to use the suit, but will accidentally power down the suit's shields, providing an opportune time to kill him quickly with a corrosive weapon. He will drop the second ECHO log of evidence when dead.

After the second courier's death, all remaining couriers will be ordered to report to a saferoom and await reinforcements should they see a vault hunter. The third and last courier can be found near the elevator close to the bounty board. Equipped with a jump pack, he will move quickly to other areas of the supply depot if not immediately killed.

If he survives long enough, he will make his way to the Laser Amplification Nexus. Once there, he will close himself in a saferoom that is accessed by climbing down a ladder and moving along a catwalk. A control panel near the ladder must be activated to open the door of the saferoom, leaving just enough time to quickly sprint to the door around the corner before it closes again.

Once dead, the last courier will drop the final ECHO log. When all three logs are retrieved, the mission may be turned in back at the bounty board.

"Yeah, but when you go by percentage, the fact that they're wearing red had nothing to do with their death. maybe it just makes them more visible, who knows." 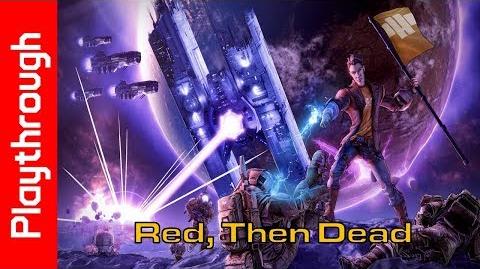 Red, Then Dead
Retrieved from "https://borderlands.fandom.com/wiki/Red,_Then_Dead?oldid=427207"
Community content is available under CC-BY-SA unless otherwise noted.