All the Little Creatures

Recruitment Drive is an optional mission in Borderlands: The Pre-Sequel.

Put up some posters for Rose and the Concordia People's Front.

"The Concordia People's Front needs you for the revolution."

This timed failable optional mission is available from the Triton Flats Bounty Board. An incendiary weapon is useful for this mission, but not necessary due to the presence of incendiary barrels at each competition poster location. Once accepted, the recruitment posters must be picked up at the People's Front's secret base in the western Burraburra area of Triton Flats. The facility is accessed via a skylight destroyed by shooting a pair of exploding barrels. Three recruitment posters must be placed at designated areas and three rival party's posters must be burned, all within four minutes.

Once all posters are placed and all rival party's posters are destroyed within the time limit, the mission may be turned in at the bounty board. 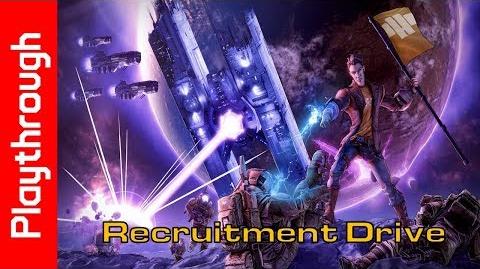