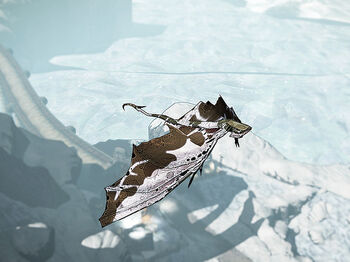 Rakks are flying creatures native to Pandora. They have a flat, fleshy head ending with a pointed snout, with a brightly colored, bony plate on the top, and hooked, rasping barbs lining a soft, slit-like mouth on the bottom. Rakks do not have grasping claws or lower limbs, and instead have a set of curved, razor-sharp talons upon a flexible tail that they use to adhere to rocky surfaces.

Rakks appear to be highly social creatures with a task-based hierarchy that includes scouts, hive defenders, food processing, and perhaps even long-term food storage, similar to honeypot ants on Earth. They are known to be vocal, howling or screeching to rally a flock when a target presents itself or proves itself to be a threat. They also emit a screech at the moment of their slashing attack.

Carnivorous and known to kill living prey, rakks can swoop down and use their tail to lacerate their targets without losing speed, letting them quickly gain altitude and set up another attack run. Like all creatures, there are badass variants which have elemental properties and will often try to bomb enemies with ranged elemental attacks rather than employ the usual diving slash.

Rakks have a large target profile and no critical spot to exploit, however they are extremely fragile and almost any weapon can be used to dispatch an individual rakk fairly quickly.

Vault Hunters would do well to be wary of rakks patrolling the sky. If an attacking flock of rakks isn't promptly detected it can be deadly at lower levels, and devastating at higher levels. However, it should be noted that not every flock of rakks will attack without provocation and that it is occasionally best to leave them alone.