Raiders of the Last Boss

Raiders of the Last Boss

Raiders of the Last Boss is an optional mission in Tiny Tina's Assault on Dragon Keep. It becomes available after Fake Geek Guy and A Game of Games are complete.

In Lair of Infinite Agony, the marked objective is a brazier in the hands of a statue. With 20 Eridium placed in the bowl, a portal opens which will allow access into The Winged Storm. Once inside the only thing left to do is to drop down into the arena and summon the Ancient Dragons of Destruction by activating the scroll on the pillar in the center of the arena.

Vault Hunters will be out in the open, with no cover, so good shields and other defensive reinforcements become an important consideration for the fight. Adaptive shields offer valuable elemental resistance, and Booster shields can help with restoring shield energy. Defensive relics and class mods will similarly help, especially if matched to act in harmony with the chosen shield. Transfusion effects, from grenades or Moxxi-branded weapons, will assist with restoring lost health. Be extremely careful with Rocket Launchers . While they can be effective in seriously damaging a specific dragon so the fight becomes easier, it isn't uncommon for one of the airborne dragons to fly down towards the platform without landing, and may get in the way of the shot at such a close range that the person who fired it may accidentally down themselves from their own friendly fire.

There are two ammo shrines and one defense shrine in the arena.

Each dragon has unique abilities and resistances:

Healianth has the most health - about 50% more than Incinerator, twice that of Brood, and three times that of Boost.

A shield with immunity to burning can protect the character from being set on fire by the flames from Incinerator's special attack. The burning coals below the grates will burn bright yellow just before igniting.

The Green Basilisks' corrosive attacks also can cause corroding. The Basilisks themselves are not exceptionally tough, and can serve as sources of Second Winds. The Vault Hunters may want to leave a couple of Basilisks alive while fighting the bosses, if the chance of a Vault Hunter becoming crippled is high.

Dealing damage to a dragon will force it to land, giving a stationary target for the Vault Hunters to focus on. If the damage is scattered or otherwise ineffective, the dragons can land randomly. The order in which the dragons are killed does not necessarily matter, however Boost and Healianth are priority targets because they can make the fight more difficult the longer it persists.

Generally speaking, Healianth and Boost should be the priorities to be taken down first. A key step in this fight is to avoid damaging a dragon which the Vault Hunters do not wish to land, especially Healianth and Boost. Incinerator should be the third or last target, as it is the second toughest, is heavily resistant to incendiary damage, and it is invulnerable to damage during its special attack, which can last a fair amount of time. If the Vault Hunters do not have enough damage output to take down a dragon during a single landing, then they should avoid damaging Boost until at least two dragons have been killed. If Healianth is not the first target, then the Vault Hunters should make sure to avoid damaging it until they have killed their current target.

Salvador can have a Miss Moxxi weapon in one hand, and a high damage weapon in the other hand, which lets him regenerate his health and simultaneously deal high damage. Inconceivable and Money Shot are invaluable for this strategy. Wielding a powerful weapon of the same type as the Moxxi weapon being used, along with Divergent Likeness, is also recommended.

For the above reasons, in team play, a Gunzerker can always be at the core for damage output. However, Sirens, Psychos, and Commandos make excellent teams. Sirens can Res from a distance, Psychos can survive with Elemental Empathy and a Grog Nozzle, and Commandos can provide cover with Phalanx Shield turrets. With the right combination, strategy and damage output, controlling which dragons land can overcome scattered damage from turrets and Flame of the Firehawk shields.

Should a Mechromancer be in the party, it is highly recommended to make sure all skill points are put into damage skills, especially Anarchy. Deathtrap should be used cautiously and sparingly, mainly due to the fact that Deathtrap will fire lightning at the dragons in the air. This can cause one of the dragons you don't want to land, to land.

With the critical damage bonuses available to the Assassin class, an Assassin can be an extremely effective damage dealer, since it is fairly easy to score critical hits against a dragon when it is on the ground. A sniper Assassin can quickly build up stacks of Critical Ascensi0n, greatly increasing his damage output. An Assassin specializing in pistols can make great use of the Lady Fist. As each dragon has relatively low health, an Assassin with Killing Bl0w can very quickly finish off a weakened dragon.

Upon completion, a massive quantity of loot will erupt from the middle of the arena, including one of their unique Seraph items, a large number of seraph crystals, and a massive amount of of Eridium. A bridge will also appear, granting access to a massive number of chests. The first chamber past the bridge houses many Mimics; all chests in this room are Mimics, which can be fought for extra Eridium and loot drops.

Beyond the Mimics are 59 Dice Chests. Some of the Dice Chests are hidden and require jumping on railings and roofs to reach. Three of the dice chests are below the chain railing on the southernmost walkway, and are not accessible until an animation on the southern horizon plays. The animation is of a giant golem battling and eventually defeating a giant mimic. The ground will shake throughout this event. The chance of this happening is completely random.

"Loot, money, and blood! Such is the life of a Vault Hunter!" 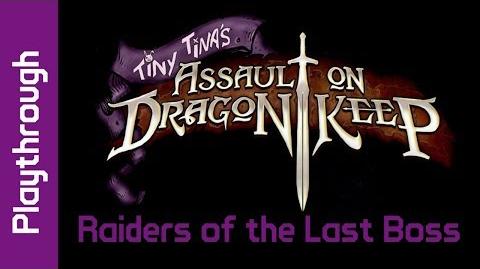