Pyro Pete's Bar is one of the arenas in the Mr. Torgue's Campaign of Carnage DLC. It is only accessible by traveling through The Beatdown.

During the storyline, players are forced to fight through drunken brawlers inside the bar, which includes Torgue engineers, rats, and bandits. As the battle progresses, Badass Enforcers will join the fray, and they must be eliminated. After that, players can move on to take down Pyro Pete, the fourth place contender in the Campaign of Carnage.

The bar brawl missions can then be repeated in tier 2 and tier 3 difficulties. Completing the third tier opens access to Tier 3 Rematch: Bar Room Blitz, which can be repeated endlessly for a reward of experience points and 20 Torgue Tokens each time. Players can also defeat the upgraded version of Pyro Pete, Pete the Invincible, once the main storyline is completed. 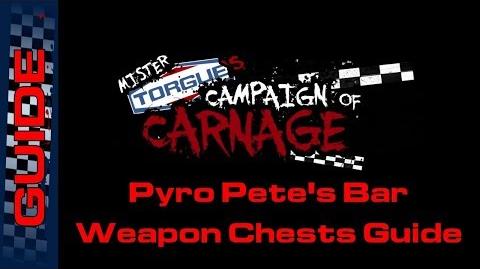