Putti are small flying Guardian enemies encountered in Borderlands: The Pre-Sequel. Putti are spawned by the various varieties of Opha.

Putti fly in a slight zig-zag pattern which, coupled with their small size, can make them difficult to target. However, their very low health and lack of shields does mean that when attacks do connect, the Putti is significantly damaged if not outright killed.

Due to their small size and fast movement speed, weapons with either a wide projectile spread (such as Shotguns) or high fire rate (such as SMGs or Assault Rifles) are recommended to quickly dispatch of them.

If there's a turret base nearby, Putti will fuse whit it and become a Kestros ar Onager, depending on base's type.

Putti are also occasionally used by Ophas as projectiles. These Putti-projectiles are usually launched directly at Vault Hunters, but can also be launched into the air, homing in on the Opha's target instead. These Putti behave like rockets rather than enemies - they don't have a health bar but can be shot down to avoid the significant damage they can cause.

An Opha spawning a Putti

An Opha using Putti as projectiles 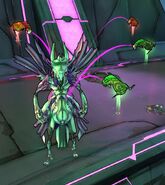 Putti attending Opha
Add a photo to this gallery


Retrieved from "https://borderlands.fandom.com/wiki/Putti?oldid=401727"
Community content is available under CC-BY-SA unless otherwise noted.