"Grab the loot off the train tracks"

Playing Chicken is a challenge for Hyperion Hub of Heroism in Borderlands: The Pre-Sequel.

On the far eastern side of Hyperion Hub of Heroism in the World of Shopping area, is a closet where Dean is locked up for the mission Hot Head. When facing said closet and standing directly in front of it, there is a staircase to the left of it leading to a top storey walkway above the lower main area. Across the walkway is a train track where a small train cart periodically goes past.

Wait for the train to go past the end of the walkway to avoid getting run over, and quickly sprint along the train tracks in the direction of Jack's Office before another one appears. On the right-hand side of the tracks near Jack's Office is a small platform that contains several ammo crates and a single red Hyperion weapons chest.

The challenge is considered complete when the Vault Hunter steps onto the platform where the loot is hidden. 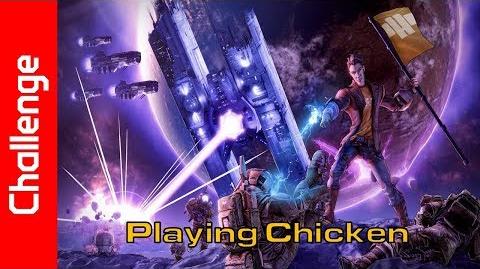