Picking Up the Pieces

Picking up the Pieces is an optional mission in Borderlands: The Pre-Sequel.

Discovering the first eye chunk and accepting the mission leads to an objective to recover two more chunks, as Jack, still furious over losing the Eye of Helios, figures that he might be able to repair The Destroyer's eye if he can salvage the pieces. One of them is in a hard to reach place on the roof, and to access this one needs to use the boost of an Oz kit to double jump up onto a diagonal strut beneath it. The lowest part of the strut is slippery, and only by jumping and then boosting can enough height be attained to reach the climbable upper section.

The rest of the mission is simply a case of following directions back through Research and Development. Laser weapons are provided to test the eye if a Vault Hunter doesn't have one. When shot with a laser, the eye explodes violently and nearby Vault Hunters may be caught in the blast and downed if they stand too close when it blows up.

"Humpty Dumpty ain't got nothing on this." 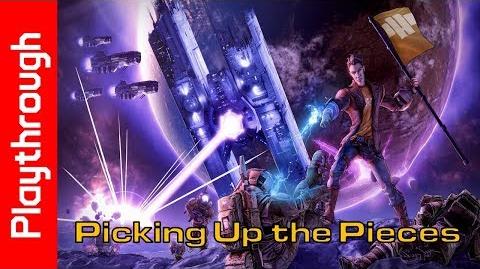 Picking Up the Pieces
Retrieved from "https://borderlands.fandom.com/wiki/Picking_Up_the_Pieces?oldid=472844"
Community content is available under CC-BY-SA unless otherwise noted.