This article is about the mission. For other uses, see Pete the Invincible (enemy).

Long Way To The Top

Pete the Invincible is an optional mission in Mr. Torgue's Campaign of Carnage given by Moxxi. It becomes available only after Long Way To The Top is complete.

The battle against Pete takes place at Pyro Pete's Bar, and is fairly straightforward, if particularly lengthy due to his high health and strong shield. Keeping a good distance between Pete and the Vault Hunters is vital, both to avoid his sweeping flame/acid attacks, as well as maximizing the small chance that the character will be outside the range of his periodic nova explosions. Axton's Sabre Turret, Zer0's Decepti0n hologram, or Gaige's Deathtrap can be useful for this purpose, as like other raid bosses Pete will prioritize attacking these targets when they are present rather than the character.

Management of the burn and corrosion status effects Pete inflicts must be done carefully, as extinguishing the status effects using the nearest valve will cause the enemies spawned by each valve to level up three levels at a time. Rat or spiderant level increases are capped at 14 levels above Pete, and at such high levels can even pose more of a threat than Pete himself. Allowing the corrosion or fire effect to last long enough for Pete to set off a second nova explosion is recommended if possible, as one use of the valve will extinguish both status effects, as well as providing appropriately leveled targets for getting second winds. A Booster Shield with even a trivial chance to drop a booster can help with this, as the damage from the status effects qualifies for triggering a booster drop, but the Big Boom Blaster is an optimal choice. Alkaline/Inflammable shields will also prevent status effects from occurring outright if worn during the nova. If frequent use of the valves cannot be avoided, spawning high-level spiderants is preferable to high-level rats, as the player need only keep their distance from the former.

While avoiding the status effects entirely is desirable, it is also usually impossible owing to the large blast radius of each nova explosion. Characters must be nearly on the other side of the arena for Pete's nova explosions to miss them, and if they occur near the center of the arena then it is unlikely that there is any safe area. A nova explosion cannot be avoided except by putting distance or an obstacle between Pete and the character; even the Phalanx Shield from Axton's Sabre Turret will collapse before the explosion is finished.

Pete is vulnerable to slag, which can dramatically reduce the time it takes to kill him. Shock damage is also recommended during the first portions of the battle to drop his shields quickly. Although Pete uses corrosive and fire attacks, he is only directly resistant to corrosive damage during his caustic phase, though corrosive damage is reduced during all other phases. He is fully resistant to fire during all phases.

As a humanoid enemy, Pete's critical hit zone is his head. However, at the beginning of the fight, the critical hit spot is covered with a helmet that prevents shots from landing critical hits. The helmet can be knocked of with a direct hit to it, but normally only once Pete's shields have been depleted. The only exception is the Trespasser sniper rifle, which can knock the mask off even while Pete's shields are full due to the weapon's special shield-bypassing effect

It is possible to avoid Pete's "pyrocaustic" phase entirely with the use of the Trespasser.  Since Pete will only change phases after his shields are depleted, using the Trespasser exclusively will allow the Vault Hunters to keep Pete in his first phase throughout the fight, allowing groups of any size to avoid Pete's status effects entirely through careful use of Alkaline and Inflammable shields.  Magic Missile or another source of slag can be used to speed up the fight, though the Vault Hunters must be careful to leave Pete's shield intact.  The Bee or other Amp Shields are another option to increase the damage of the Trespasser.

A slight collision error in the map is present which can block most, if not all, of Pete's attacks. When first entering the arena there are two vertical poles located to the right. One can use the raid post to spawn Pete then run to the poles and grenade jump to the ledge and use the poles as shield from his novas. Pete may follow by jumping but will get stuck and Vault Hunters can jump down and shoot him from ground level. Another way is access the legde is to hold forward key and jumps at an angle towards the intersection of the ledge and the furthest pipe causing them to wedged between the two, at which point it will be possible to rapidly press jump and "climb" onto the ledge. Pete has really strong melee attack and can easily kill Vault Hunters while they are in the process of climbing. Since Krieg can't grenade jump, climbing is the only way to reach the ledge. Release the Beast can be used when on low health to survive Pete's melee attack while he climbs to the ledge.

Further exploration of the arena is possible from this point, using grenades to grenade jump onto the upper scaffolding; best if grenade mods are removed first. The scaffolding areas contain numerous ammo boxes and one outhouse which can be used to aid in the battle. Once on the higher levels it is even possible to summon Pete using the raid post, as the entire height of the raid post, including the top, can be interacted with.

Solo players can successfully defeat Pete without making use of map exploits or other tricks. The core strategy remains unchanged, but players will have to use more specific gear and weapons to eliminate him. The biggest concern is running out of ammo, as Pete's health and shield levels will not scale down to match the lower number of players. Using the Infinity pistol, The Bee shield with an automatic weapon, and any ammo regenerative effects such as Gunzerking are strongly recommended for a solo effort. Since the spawns from the pipes do not seem to gain much health alongside their level, a strong Singularity grenade can kill most of them in a single blast, and already heavily damage the higher level ones, while also pulling Pete away.

Solo play also allows for additional tactics which are not possible in co-operative play. In particular, the status effects of Pete's twin novas during his "pyrocaustic" phase can be avoided completely by using alkaline and inflammable shields (which grant immunity to corroding and burning status effects, respectively), and with clever timing. Prior to a twin nova, equip the character with an alkaline shield. Once the first wave of the nova (the corrosive wave) hits, they can enter their inventory and switch to an inflammable shield prior to the second wave of the nova. Since the game pauses while in solo play, this will allow time to switch between the alkaline and inflammable shields, neutralizing both status effects completely.

"To fight Pete the Invincible again, go push the button again. Remember limit once per day."

Turn in: Moxxi in the Badass Crater Bar 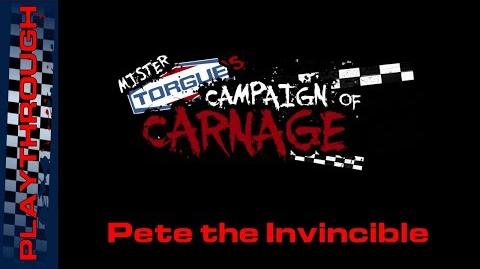 Pete the Invincible
Retrieved from "https://borderlands.fandom.com/wiki/Pete_the_Invincible_(mission)?oldid=436972"
Community content is available under CC-BY-SA unless otherwise noted.