Paint Job is an optional mission found within Hyperion Hub of Heroism in Borderlands: The Pre-Sequel.

Help Professor Nakayama get Jack to notice him.

"Momma always said, boys are mean to you because they like you."

Professor Nakayama, who is still awaiting an answer from Jack regarding his urgent message, asks the Vault Hunters to collect some spray paint from the Claptrap repair shop and give it to a Claptrap unit.

The paint can be found within a Hyperion ammo chest located directly behind R-0513 in the Claptrap repair shop. After collecting the paint, Nakayama notes that it is yellow paint and as it is Jack's favorite color, it will mean that he cannot ignore it. The Claptrap the paint must be given to is the blue Worker CL4P-TP located within Jack's Office, at the start of the hallway just beyond Hyperion Customer Service. After giving the Claptrap the paint can, it will travel down the hallway towards Jack's office and paint a crude stick figure of Jack on the wall which Jack describes as looking like a "skag dry-humping a vending machine".

Nakayama then expresses his disdain over Jack not understanding the meaning of the painting and will ask the Vault Hunters to return to the Hyperion Hub of Heroism to collect flowers. Three flowers must be collected, located directly beneath the 'Flowers 407' sign in World of Shopping. Nakayama asks the Vault Hunters to place the flowers inside flower pots at the entrance to Jack's Office. Once the flowers are planted, the Voice of Hyperion declares them a fire hazard and instructs that they are burned with an incendiary weapon (one is provided as a mission weapon), to Nakayama's horror.

After all the flowers are burned, Jack demands to know who is responsible for the defacing, and Nakayama admits it was his doing. Jack demands Nakayama stop defacing Helios on the threat of being fed into a weapon grinder. Nakayama delightedly calls the mission a success on the grounds of Jack almost pronouncing his name correctly, and the mission can then be turned in to him.

"The level of Professor Nakayama's dedication is truly astounding." 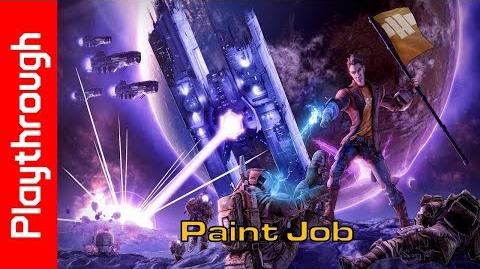 Retrieved from "https://borderlands.fandom.com/wiki/Paint_Job?oldid=472845"
Community content is available under CC-BY-SA unless otherwise noted.