Shock, Incendiary, Corrosive,Slag, or None

I'm gonna need you to stand back. – Fires 9 E-tech projectiles in a unique pattern (8 in a circle and 1 in the center) with the pattern expanding and contracting as it travels. Consumes 1 ammo per shot.

The Omen shoots a blaster-like spread of pellets with the middle projectile maintaining a straight trajectory. This makes it more useful than most Tediore splatguns in terms of range. Upon reloading, the Omen is thrown and explodes. Since the pellets travel in an expanding and contracting pattern, if the correct range is found, all pellets will converge on the target at once, doing maximum weapon damage.

Due to the spread of the bullets, Maya is capable of using Phaselock with Converge to concentrate enemies and deal damage to several enemies at once. Damage output is greatly increased if Wreck is also used. If she has Restoration, the Omen can be used to both damage enemies and heal allies during combat. The bullet spread means that her shots hit both friend and foe, so in combat, she could position herself behind another Vault Hunter and fire toward enemies, making sure the spread is large or small enough to hit both. 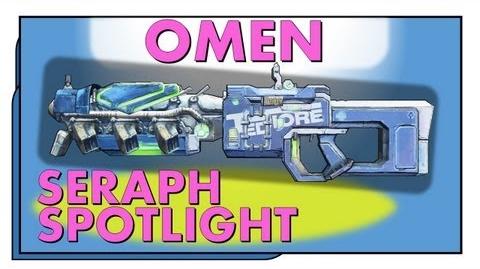