For other uses, see Ogre.

Ogres chew their food. –  Has an extra 100% splash damage bonus and can fire two shots in rapid succession (an ability similar to other Spitter rifles). It has a chance to randomly increase its fire rate and reload speed for a short period, and during this buff its projectiles will also ricochet.

The Ogre behaves much like any lower-quality Torgue Spitter rifle with a plethora of added perks.

Due to the fact that the Ogre has the highest magazine size of any Torgue rifle and does not consume multiple ammo per shot, it is an attractive weapon for Axton players investing in the Gunpowder tree, as all of the bonuses to gun damage, assault rifle damage, and grenade damage improve the Ogre's damage.

The Ogre is also a versatile weapon for any character, as each character has skills that can benefit and/or compensate for any of the Ogre's flaws. Maya's Accelerate and Zer0's Vel0city can compensate for the natural Torgue penalty of bullet velocity. Krieg has fire rate and explosive bonuses, and his Bloodlust tree gives the Ogre a much higher clip for little effort, quickly building up stacks with its already high magazine size. During Salvador's Gunzerking, a weapon paired with the Ogre may enjoy the latter's random bonuses. Of course Gunzerking with two Ogres Salvador can achieve an impressive level of explosive carnage.

The Ogre's random buff properties may be temporarily passed on to other weapons by switching, similar to the Grog Nozzle's 'drunken' effect affecting switched weapons. Ricocheting projectiles may be more noticeable on other weapons than on the Ogre itself. 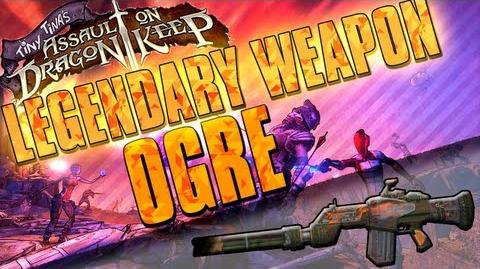 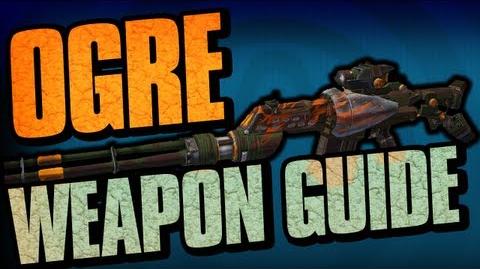 Borderlands 2 How To Get Ogre Legendary Assault Rifle-0
Retrieved from "https://borderlands.fandom.com/wiki/Ogre_(Borderlands_2)?oldid=450684"
Community content is available under CC-BY-SA unless otherwise noted.