The Nukem is an extremely powerful rocket launcher that fires rockets in a heavy arc, creating a very large blast radius and dealing heavy damage. Like other Torgue weapons, it only spawns with the explosive elemental, and is affected by grenade damage modifications, further boosting its lethality. The weapon is extremely useful for getting out of Fight For your Life, as the sheer damage and blast radius is enough to put most enemies down in a single shot. Care needs to be taken, as it is very easy for the user to instantly put themselves in Fight For Your Life mode. Its arc and short-range limit it to a last-ditch weapon or in an area with large amounts of cover. The arc can be exploited and used to hit enemies that would otherwise be impossible to hit, or to prevent exposure to enemy fire. 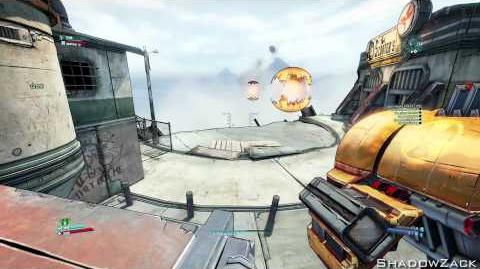